Apple today posted its apology on the Apple Website to Samsung, following its unsucessful attempt to have Samsung devices removed from sale in the UK for copying the iPad design.

Apple considers that Samsung infringed its patents and registered design of the iPad with the Galaxy Tab 10.1, Tab 8.9 and Tab 7.7 devices. The UK courts disagreed, however, and Apple lost the case.

Apple itself does not directly state that the Samsung Tab does not copy the iPad, only that the High Court Justice of England and Wales “ruled that Samsung Electronic (UK) Limited’s Galaxy Tablet Computernamely the Galaxy Tab 10.1, Tab 8.9 and Tab 7.7 do not infringe Apple’s registered design No. 0000181607-0001″

The apology then goes on to have several not-so-subtle digs at Samsung, by quoting the judge:

In the ruling, the judge made several important points comparing the designs of the Apple and Samsung products:

“The extreme simplicity of the Apple design is striking. Overall it has undecorated flat surfaces with a plate of glass on the front all the way out to a very thin rim and a blank back. There is a crisp edge around the rim and a combination of curves, both at the corners and the sides. The design looks like an object the informed user would want to pick up and hold. It is an understated, smooth and simple product. It is a cool design.”

“The informed user’s overall impression of each of the Samsung Galaxy Tablets is the following. From the front they belong to the family which includes the Apple design; but the Samsung products are very thin, almost insubstantial members of that family with unusual details on the back. They do not have the same understated and extreme simplicity which is possessed by the Apple design. They are not as cool.”

Not exactly the most sincere apology, and it’s clear that Apple does not agree with the ruling. 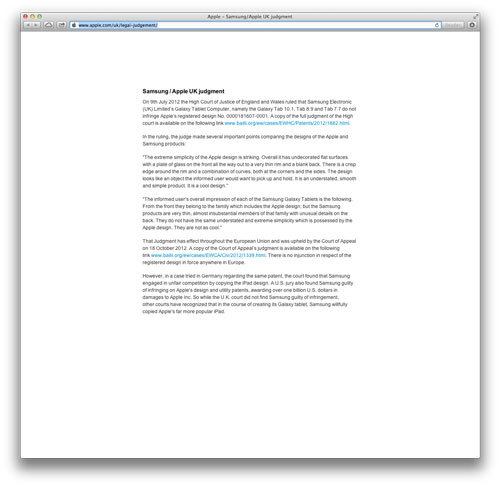