Amazon has placed a full-page advert on its home page that compares the new Kindle Fire HD to the new iPad mini.

The advert titled Much More for Much Less compares the specifications and price of the Kindle Fire HD against the iPad mini.

The page claims that the Kindle Fire HD has 30% more pixels than the iPad mini, 216ppi (pixels per inch) versus 163ppi, dual stereo speakers, and ultra-fast MIMO Wi-Fi.

Amazon also claims that the Kindle Fire HD has “watch HD movies and TV” as a feature, and “No HD movies or TV” on the iPad mini, which strikes us as an odd claim given that they both have the ability to download and play HD movies. 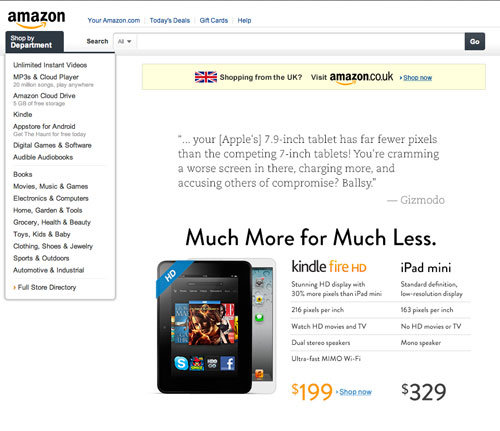 The other claims are debatably true, although it does rather omit other facts such as iTunes Match, app store apps, iCloud storage and services, Siri, and lots of other features. It has been noted many times before that Apple traditionally doesn’t compete on pure specifications, but on building cohesive holistic products with high build quality and good functionality; and companies that attempt to draw attention to specifications are somewhat missing the point (usually to their financial detriment).

The price issue is somewhat more straightforward. There’s no denying that Amazon has a compelling proposition with a competent tablet priced at £129. The Kindle Fire HD might not even have to be good at that price to gain marketshare, it might just have to be “good enough”.

It also features a quote from tech-site Gizmodo that says “your [Apple’s] 7.9-inch tablet has far fewer pixels than the competing 7-inch tablets! You’re cramming a worse screen in there, charging more, and accusing others of compromise? Ballsy.”

The relationship between Gizmodo and Amazon has been fractious ever since the tech-site was accused of buying a stolen iPhone prototype, the story and subsequent details led to the Californian police department issuing a search warrant for Gizmodo’s editor Jason Chen’s apartment and seizing his computers.

Apple has subsequently refused Gizmodo entrance to the Apple WWDC and other events.

The advert is a continuing sign that this Christmas will be a battle for the hearts and minds of the general tablet buying public. Both Amazon and Google are offering vastly cheaper alternatives to the iPad, in what could be a make or break year. If neither Google nor Amazon can secure significant market share this year, Apple may dominate the tablet market for the foreseeable future.

Conversely, Apple has released a cheaper iPad in the form of the iPad mini, which is a clear response to developments in the rest of the market. While the iPad mini is cheaper than the iPad, and other 9-in tablets, it is still significantly more expensive than Google or Amazon’s offerings. How this all pans out amongst customers over the holiday period will be interesting to watch.