Today’s news that Scott Forstall is departing Apple may herald a new design future for Apple products, one that moves away from apps imitating real life materials such as wood, leather, and cloth.

Scott Forstall was said to be a big proponent of a type of interface design known as skeuomorphic, which tries to imitate artifacts and textures from real life. Typical examples would be the leather binder effect of Address Book, or the wooden poker table of Game Center,

Steve Jobs was said to appreciate skeuomorph design too, although other executives such as Jony Ive are rumoured to consider it outdated and that computer interface design no longer required recreations of real-world materials. A rare inteview with The Telegraph newspaper, journalist Shane Richmond says: “When I mention the fake stitching, Ive offers a wince but it’s a gesture of sympathy rather than a suggestion that he dislikes such things. At least, that’s how I read it. He refuses to be drawn on the matter, offering a diplomatic reply: “My focus is very much working with the other teams on the product ideas and then developing the hardware and so that’s our focus and that’s our responsibility. In terms of those elements you’re talking about, I’m not really connected to that.”

Today’s management shake-up at Apple changes all that. Jony Ive is now very much connected with that side of things, and is now very much responsible for the way software interfaces look, as well as hardware design. Apple’s press release reads: “Jony Ive will provide leadership and direction for Human Interface (HI) across the company in addition to his role as the leader of Industrial Design,” Apple said in a press release announcing the change. “His incredible design aesthetic has been the driving force behind the look and feel of Apple’s products for more than a decade.” 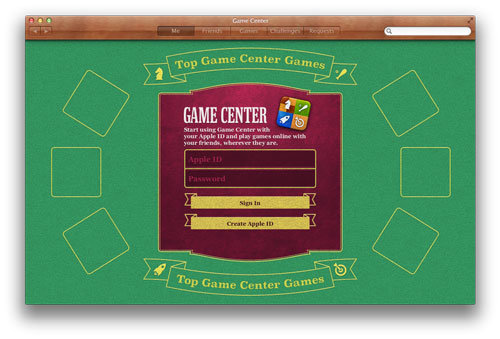 Apple’s Game Centre displays Skeuomorphic design principles. The menu bar is designed to look like it’s made of wood, while the main window has the green cloth from a gaming table. The interface is designed to replicate real-world materials associated with a type of real-object associated with the function of the program: in this case a poker table represents gaming.

Daring Fireball’s John Gruber writes, “I don’t think it can be overstated just how big a deal it is that he now oversees all product design, hardware and software. For the last year, outside observers have been left to wonder just where the buck stopped for UI design at post-Jobs Apple. That question has now been answered: Jony Ive.”

Macworld UK criticised the skeuomoprhic design choices moving from iOS into Mac OS X with the launch of Mountain Lion referring to many apps having a “weird beige teak-wood effect”. We also criticised the inconsistency of the design which may be due to gradual implementation, or also a sign that the design was not universally popular at Apple.

It is often said that anything worth doing is controversial, and skeuomporhic apps certainly have a Marmite-esque love it or hate it feel to them. Macworld UK’s editor in chief Mark Hattersley says “make no mistake… I really, really hate this style of app. I’ve grown up with computers, and software, and there are younger kids that grew up with apps and the internet. We don’t need apps to look like props from Mad Men to understand them. If anything making an app imitate a leather binder that I’ve never owned, and never will own, makes it more confusing not less.”

It may be that with Scott Forstall’s departure, and Jony Ive’s increased respoinsibility for interface design that we see a return to the minimalist style that marked apps such as QuickTime, or the rumoured Marble interface (mostly black and silver) for Mac OS X that owes more to products such as Final Cut Pro X and Logic than skeuomorphic designs.