Apple’s Siri isn’t as clued up about Hurricane Sandy as Google’s voice-search function.

When asked about the superstorm, Siri offered details of a hockey team, writes blogger Dan Nuygen.

Google’s tool, on the other hand, managed to deliver relevant results including Google’s crisis map.

Another post shows the weather forecast Siri showed to one New York resident prior to Hurricane Sandy hitting on Monday. Like Michael Fish, Siri insisted ” I don’t see any reports of hurricanes.” 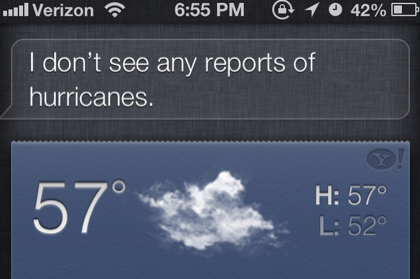 [Back in 1987, prior to the Great Storm of 1987, Fish was presenting the weather and said: “Earlier on today, apparently, a woman rang the BBC and said she heard there was a hurrican on the way… well, if you’re watching, don’t worry, there isn’t!”. That was the worst storm to hit the South East since 1703.]

Google added an advanced voice search feature to its iOS search app earlier this week. Google’s voice search can’t launch apps or set alarms for you like Apple’s Siri can, but it does provide access to the search giant’s huge data archives using Google’s Knowledge Graph.