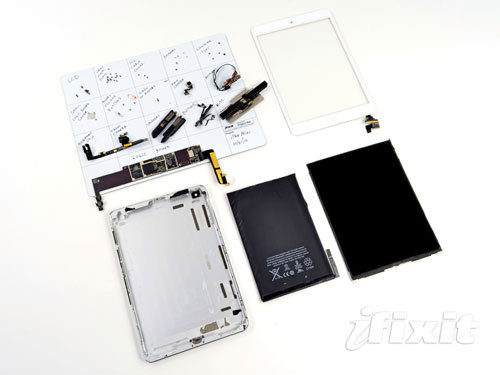 Repair specialists iFixIt.com has managed to secure an iPad mini a day before its launch, and has had fun tearing it down and revealed its internal components.

Despite the continuing legal fracas, Apple is still using a Samsung W1235 S6TNMR1X01 Display Driver LCD. Apple is said to be moving away from Samsung as a component supplier, and may be relying on multiple suppliers for a single component.

iFixit also confirms that the iPad mini sports stereo speakers, which Amazon called wrong on its web advert comparing the iPad mini to the Amazon Kindle Fire HD. iFixit.com notes “The reduction of connector size (30-pin to Lightning) has left just enough space to squeeze a second speaker into the device, allowing for sound quality that is anything but mini.”

The iPad mini sports 512MB of RAM, like the iPad 2 and iPod touch and is all held together with “copious amounts of glue” and hidden screws.

iFixit.com gave the iPad mini a low “2 out of 10” for repairability with the following notes:

– The LCD and glass are not fused together and can be replaced independently.

– The battery is not soldered to the logic board or other components.

– Teeny-tiny screws can be easily misplaced if you’re not careful. Don’t sneeze too hard while taking them off.

– The Lightning connector is soldered to the logic board, so don’t bend its pins.