Content sits at the heart of the iPad experience. The high-quality IPS display that you find on all iOS devices, and its portable nature make it great for reading books, comics, and watching movies.

Apple supports all this with vibrant book and movie stores, while comics can be purchased via apps such as Comics.

The iPad mini is an interesting proposition given that it’s dimensions are smaller than a regular iPad (but bigger than an iPod touch or iPhone). It’s book-like form factor, and lighter weight (just 375g with a Smart Cover and a scant 307g without) ensure you can comfortably hold it one-handed, but the display is regular rather than Retina (unlike the last two iPad, iPhone and iPod touch fans).

It’s not a straightforward comparison between the iPad mini and the older iPad, however. The iPad mini’s display has 163ppi (pixels per inch), which is slightly denser than the 132ppi of the original iPad (and iPad 2) but less than the 264ppi of the third- and no fourth-generation iPad. Although it leans more towards the original iPad than the Retina-display models.

Many Apple fans have had plenty of time to become acclimatised to the Retina Display, so the question is how good is the iPad mini for reading text, comics, and watching movies. The types of things where having a high quality Retina display really matters?

Reading books on the iPad mini

We quickly installed iBooks and the Kindle app on the iPad mini and downloaded some of our favourite books. The bad news is that anybody acclimatised to using a Retina Display will immediately be able to spot the difference.

Text on the iPad mini is just ever so slightly blurry when compared to a Retina Display iPhone or iPad mini. It’s back to the days of using the original iPad. Mind you, we managed to comfortably read books on the iPad from start to finish, and enlarging the text slightly ensures that it remains comfortable to use.

There was no discernible difference between using the Kindle and iBooks (both apps are extremely similar in scope and function).

The good news is that it’s still perfectly possible to sit back and relax and read a book with an iPad mini. This is just as easy as it is on the full-sized iPad, although we do find jumping from Retina to non-Retina jarring when it comes to text. The size and lightness of the device ensure that it’s a great book replacement, however. 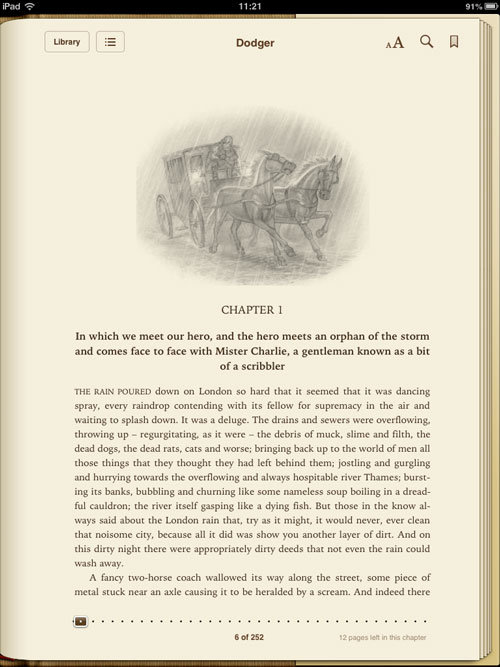 Reading comics on the iPad mini

We downloaded Comics and ComicZeal app and installed a couple of comics to take a close look at.

Comics turned out to be another area in which the iPad mini really shone. We thought that the smaller display would detract from the readability of a comic book, but it turns out that most comics look great on the 7.9in display. Also, you can flip the iPad into horizontal mode and flick up and down the comic.

Because the iPad mini is a lot smaller and lighter than the full iPad, it’s great for reading comics, and you can carry a whole comic book collection around with you.

Newsstand and magazines on the iPad mini

We fired up Zinio and the Macworld Newsstand app to take a look at how these fare on the  iPad mini. The good news is that they’re perfectly enjoyable in the smaller screen, and that because many magazines are still being produced at non Retina quality (because otherwise the file sizes become unwieldy) there’s little difference between viewing magazines on the iPad mini or full size iPad.

The smaller screen doesn’t quite suit the magazine format as the iPad’s display, and you need to zoom in a lot more. This doesn’t fit with Zinio or most newsstand apps which lack the intelligent zoom found in Safari (so it doesn’t automatically detect column edges and zoom that width, for example). 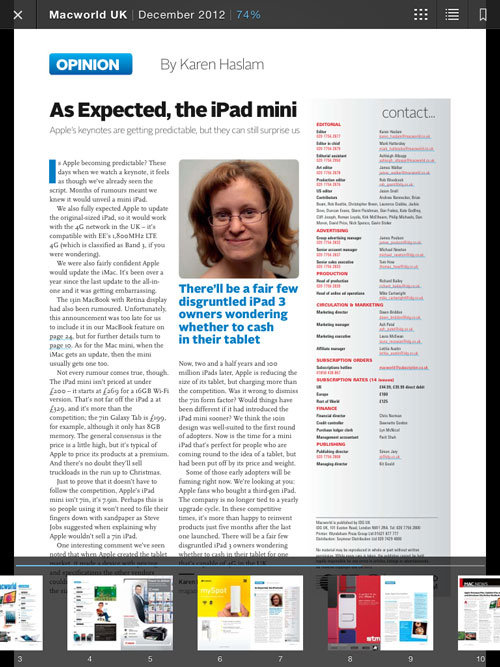 Looking at Movies on the iPad mini

The high-quality IPS LCD screens that Apple has included from the first iPad continue to impress (made by arch-rival Samsung no less). Colours are sharp, vibrant and accurate and the larger 7.9in display gives it a considerable edge over rival small 7in tablets.

Because the screen is in a 4:3 aspect ratio is has the large borders at the top and bottom when displaying most movies, which are in 16:9 aspect ratio. This is where the recent iPod touch and iPhone 5 updates are really showing their colours, with displays that manage to genuinely punch above the weight of the devices.

The iPad mini is a great video playing device. It’s a smaller screen than the iPad, so expect a smaller image. But it’s still a good image and the portability of the device probably make this the best way to watch video on the go.

One aspect of the iPad mini that shouldn’t be underestimated is the new stereo speakers (it’s the first iPad to get stereo speakers). The sound from movies (as well as podcasts, music, and games) is particularly special in the iPad mini. And it has a loudness and clarity that is stronger than the full iPad. 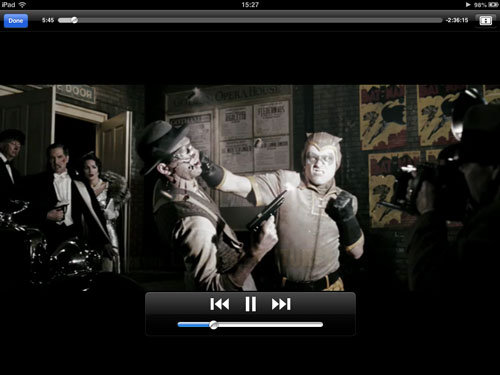 This is the part where the iPad mini gets really interesting. When we switched from the regular iPad 2 to the iPad third-generation, we noted that one area where the jump to Retina Display really didn’t have much impact was gaming.

It turns out – unsurprisingly – that the same is true in reverse. The iPad mini is just as visually stunning when playing games as a Retina Display iPod touch, iPhone or iPad.

We’ve only had the iPad mini for a few hours, but it’s already striking us as a much better gaming machine than any other iOS system. The screen is larger than the iPod touch or iPhone, so games are more immersive, and controls fare better on the larger display. Crucially – because it’s much lighter than the iPad it’s a lot easier and better to play games on the iPad mini. Especially games that involve steering or controlling the action by rocking around the iPad mini using the accelerator (most driving games, in other words).

Both Sony and Nintendo had better watch out. We think the iPad mini could well become the portable gaming system of choice. 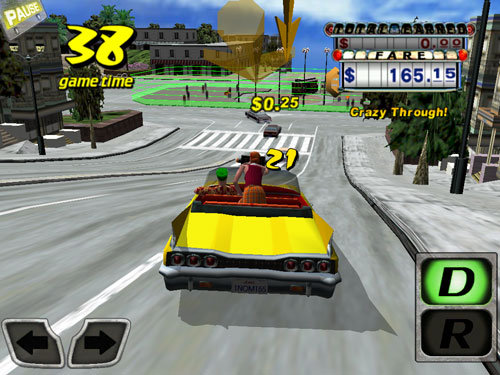 The iPad mini display in conclusion

There’s no point denying that the lack of a Retina Display doesn’t make any difference to viewing some content on the iPad mini. It would manifestly be better with one (admittedly that might have forced Apple to include a much bigger battery, and make a much heavier device, which would detract in different ways).

What is interesting is what type of content suffers, and what doesn’t. Books are the biggest culprit. Anybody who claims not to be able to tell the difference between a Retina display and non-Retina Display clearly doesn’t spend enough time in the books app.

Magazines, on the other hand, don’t really look any different, although the smaller display size means you have to zoom in and out a lot more.

Everything apart from that is gravy. Movies and television shows look amazing, comics are great to read, and it’s a sweet gaming device.

Our initial review of the iPad mini is here, and we’re doing in-depth testing over the next couple of days. But our initial expectations are that this is a great little device.

A final question: what about those of us who are used to a Retina display, such as that of the iPad 3? Will the drop in pixel density ruin our fun? Here’s a straight comparison of the two. 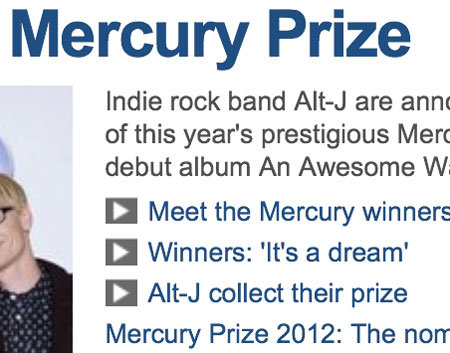 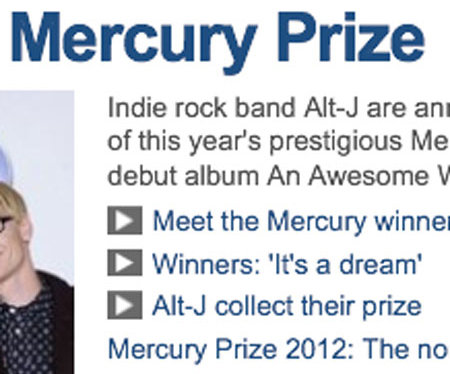 The iPad 3 is top, the iPad mini is below. As you can see, a blown up section of the screen clearly shows the iPad mini’s lower resolution. If you jump straight from one to the other and peer really closely – and particularly if you’re looking at text, which shows up resolution better than most elements – then you’ll probably notice a difference. But it’s not a massive difference.