Apple is accused of using a bit of javascript code to ensure that the link to its statement about the Apple Samsung case in the UK only appears on the home page after the user scrolls down.

Even resizing the window from the corner will not reveal the extra text at the bottom of the page.

Apple has also stopped redirecting UK residents to the UK site at www.apple.com/uk. This means that if the user lives in the UK they will arrive on the US site unless they search for www.apple.co.uk – a site that until recently wasn’t even owned by Apple.

Is Apple in contempt of court? The ruling stated that it had to appear on the home page, but made no mention of where. 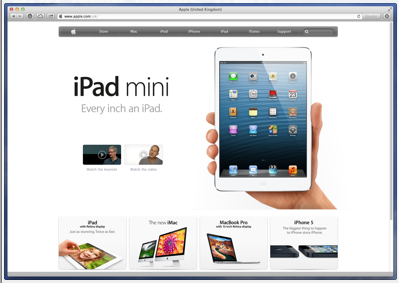 Apple had to update the statement about Samsung on its UK website to comply with a court ruling on Thursday. There is now a more detailed explanation of the existence of the statement on the home page of the Apple UK website, and it links to a page where two paragraphs of text explain the ruling.

Thursday morning saw three judges ruled that Apple must rewrite the statement it posted on its website about Samsung. Apple was given 48 hours to do so. The original statement was described as “non-compliant” with the original court order.

The new statement says that on 9th July 2012 the High Court of Justice of England and Wales ruled that Samsung Electronics (UK) Limited’s Galaxy Tabled Computers, namely the Galaxy Tab 10.1, Tab 8.9 and Tab 7.7 do not infringe Apple’s Community registered  design No. 0000181607-0001.

The statement also includes a note that the Judgement “has effect throughout the European Union and was upheld by the Court of Appeal of England and Wales on 18th October 2012. It adds that “there is no injunction in respect of the Community registered  design in force anywhere in Europe.”

Apple reprinted the statement in The Guardian on Saturday.

Macworld Poll: What tagline would you suggest for Apple’s court-mandated adverts?