Nevertheless, reports are claiming that the increase in value suggests that investors were happy about the news that Apple had sold 3 million iPads in the three days since the iPad mini and fourth generation iPad 4 went on sale.

It had been predicted that Apple would sell 1.5 million iPad minis in the opening weekend, but the number of iPad minis sold is unclear. Apple has only released figures for both new iPads. When Apple announced that there had been 3 million sales some questioned whether the company was counting online orders, many of which are yet to be delivered. According to Bloomberg, this is not the case as Apple cannot count these pre-orders before they are delivered.

A number of analysts have come up with their own estimations of first weekend iPad mini sales. 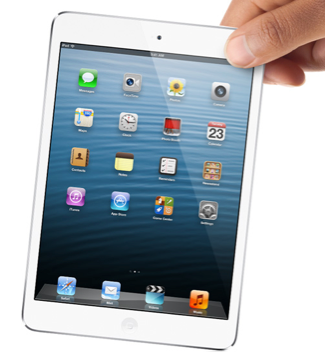 According to Fortune’s round up of analyst reaction, Piper Jaffray’s Gene Munster, who made the original 1.5 million prediction, now believes that 2 to 2.5 million iPad minis were sold over the three days. He said: “We believe 2-2.5m of the 3m iPads sold this past weekend were iPad Minis.” He based his estimation on ‘line surveys’ that showed that “roughly nine out of every ten customers was waiting to purchase an iPad Mini rather than a full-sized iPad”.

According to ISI Group analyst Brian Marshall Apple may have sold 2 million iPad mini units over the weekend. He said: “We estimate at least two-thirds of the units are iPad minis,” adding: “The iPad mini could blunt some of the competitive threat from low-priced Google and Amazon tablets,” reports Bloomberg.

The news “surpassed the expectations” of Topeka Capital Markets’s Brian White (who has a target price of $1,111 for the Apple stock. He said: “We had projected 800,000 to 1 million units; thus we believe the iPad mini surpassed our expectations.” White’s checks suggested the iPad mini sold out completely at nearly 60% of Apple’s US stores. However, White believes Apple would have sold many more than 3 million iPads over the launch weekend if the company had better supply of the iPad mini, adds an AppleInsider report.

Jeffries’ Peter Misek’s expectatios were also surpassed. He said: “Our expectations were for 2M total iPads.” He expects that sales will continue to be strong once Apple adds the cellular iPad mini.

Wells Fargo Security’s Maynard Um believes most of the 3 million iPads sold over the weekend were the iPad mini. He projects that Apple will sell 20.2 million iPads in the December quarter, with demand expected to outstrip supply over the holiday shopping season, writes Apple Insider.

Not every analyst is impressed with Apple’s sales. BTIG’s Walter Piecyk is disappointed. He notes: “Even if we assumed minimal sales of 4th generation iPads (which should raise its own red flags), the number of iPad mini’s sold was less than the number of iPad 3′s sold during the launch weekend.” However, Piecyk doesn’t note the lack of a cellular iPad mini model (launching in the next few weeks). Apple revealed that it sold 1.5m WiFi only iPad 3 models in the first weekend of sales of that device.

Merrill Lynch’s Scott Craig does note the lack of cellular and gives some interesting statistics about WiFi verses cellular ownership. He said: “We believe that the upcoming launch of LTE-based iPad 4 and mini models should serve as an important catalyst for the new product cycle. Note that iPad models with 3G/LTE connectivity represent ~45% of total iPad units and ~50% of total iPad revenue”.

As for the visibly shorter queues than for other launches, Piper Jaffray’s Gene Munster said: “While we observed lines for the iPad Mini/4th Gen iPad launch 20-50% shorter than the 3rd Gen iPad, overall units were significantly better at 3 million compared to 1.5 million Wi-Fi only 3rd Gen iPads in March. We believe that online sales helped make up the difference we saw in lines as well as the iPad Mini/4th Gen iPad launch taking place in 34 countries compared to 10 for the 3rd Gen iPad.”

J.P. Morgan’s Mark Moskowitz “In our view, this level of early adoption of the new iPad mini could restore significant upside potential down the road, as the product expands Apple’s tablet market coverage.”

There are a number of other reasons why Apple’s share price may be on the way back up.