Apple has won a patent for an advanced journaling system that can add timestamps and geotags to any event on an iOS device, including phone calls, app downloads, and each time a song has been played, for example.

The US Patent and Trademark Office granted the patent to Apple on Tuesday, which is titled ‘Journaling on mobile devices’, reports Apple Insider.

The patent covers “a journaling subsystem on mobile device stores event data related to applications or other subsystems running on the mobile device,” Apple’s abstract describes.

“The event data can be stored an indexed in a journal database so that a timeline of past events can be reconstructed in response to search queries. In some implementations, a timeline can be reconstructed with markers on a map display based on search results,” the description continues. “When the user interacts with a marker on the map display, the event data collected by the mobile device is made available to the user.” 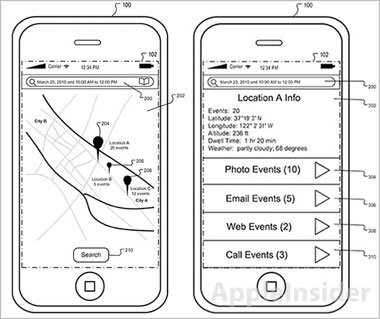 In other words, iOS device users will be able to access a map that shows what they’ve been using their phone for and where they carried out that action. Plus, users could use the technology to search their device for ’21 November 2012 and 13.00 pm to 14.00 pm and email’ and that would find all emails sent or received on that day during that time period.

It is currently unclear whether Apple intends to implement this new feature into its future mobile operating systems.