A former Apple engineer has taken to the Internet to declare Apple a dud at the Internet.

–  A popular Game Center game was able to bring down the entire network.

– Apple requires you to re-friend everyone on Game Center, Find my Friends, and Shared Photostreams.

– The iTunes and App Stores are still powered by WebObjects, a mostly dead framework written almost 20 years ago.

– iMessage for Mac lives in an alternate dimension in which time has no ordered sequence.

The piece has been picked up by  Business Insider’s Henry Blodget who believes that “it rings true” and that “with a few exceptions–such as iTunes, the App Store, and the auto-updating of its operating system releases – Apple’s online services are startlingly frustrating”.

But is it really true? Apple has had a few problems with cloud services in the past, notably MobileMe, but iCloud seems fairly solid so far, and to-be-fair Google (and every other online service) has issues. This website isitdownrightnow.com details that Google Mail was last down 5 days, 19 hours, and 1 minute ago.

I think we’re all aware that Apple is capable of updating its store without shutting the whole thing down for several hours. Amazon updates its store with thousands of new products daily, as does Apple. We don’t remember the store closing for Apple to introduce these Logitech Ultimate Ears 350vi earphones that went on sale the other day. 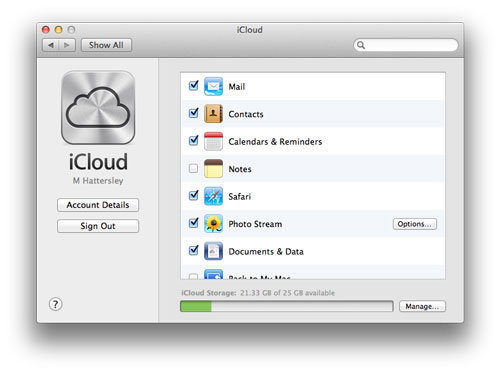 Apple clearly chooses to do it this way when introducing marquee products, presumably because the “Apple Store offline” frenzy is free global marketing.

Anybody who genuinely thinks otherwise has probably not thought things through.

That’s not to say it doesn’t matter, but all major companies are dealing with the cloud, and getting better at delivering a constant reliable service. Singling the odd outage due to heavy demand isn’t really proof that Apple is failing at a whole area of computing.

As for Notes requiring an email account to Sync. Technically iCloud takes care of this (although you need to have an account for that, which also doubles up as your email account). You can use Gmail or any other mail account as well. This seems sensible to us. Does Patrick B. Gibson expect iOS to sync without an account (is iOS supposed to guess who everyone is)? Does he think it’d be better if you couldn’t use a separate email account to sync note? Or if Notes used a propriety system so you had to use just Apple’s iCloud service?

As for the iTunes and App Stores are powered by WebObjects. Well… they work pretty well don’t they? Apple’s millions of happy customers don’t care how old the tech is as long as it works. In fact, we can’t remember the iTunes Store itself ever going down. You don’t update the underlying technology behind the world’s biggest music store just for kicks and giggles. And iTunes Store has 400 million users – that’s not a good choice to highlight a failure.

The only really good examples are Messages and Ping. One of which is very important, the other less so.

iMessage is still a very cranky service that we’d like to see Apple stabilise and improve quickly and definitely. There are issues here. Nothing that suggest Apple is failing on a larger level, but definitely something we’d like to see improved. Having said that: last time we checked our Google Android phone it didn’t have a unified messaging service (Google Voice isn’t even available outside of the US). So Google is only better in the sense that it doesn’t try. Even so: we long for a day when iMessages works all the time, flawlessly, and is easy enough to set up and explain to our grandparents.

As for Ping… fair enough. But really… is it that big a deal? See also Google Wave and Google Buzz. Or indeed any one of Google’s myriad of failed experiments. Apple seems happy to integrate FaceBook and Twitter into iOS and stay out of the social media business, which is probably for the best given that the secretive nature of the company doesn’t lend itself well to social media.

We’re not sold on this line of reasoning. Cloud services are difficult in general, and the more they become fuzed into devices like the iPhone, the more important they become. And the bigger a deal it is when they go down. Reliability becomes a big issue when much of your devices core functionality is melded with online services, and Apple seems to be forging full steam ahead with iCloud.

Apple, if anything, seems quite ahead of the curve with iCloud, and when Google starts to offer similar services it may find similar issues down the line. And if you think Google is getting better at product design you might want to take a look at a  Google TV.