The US Patent Office has published an Apple patent application that reveals the company’s plans for the future of wireless charging.

When asked why the iPhone 5 doesn’t have inductive charging capabilities during an interview following the launch of Apple’s most recent smartphone, the company’s SVP of worldwide marketing Phil Schiller said: “Having to create another device you have to plug into the wall is actually, for most situations, more complicated.”

So, in order to solve that problem, Apple has filed a patent application describing an invention that would allow mobile devices to charge wirelessly from a wireless power supply through the use of near field magnetic resonance (NFMR) power transmission.

Patently Apple reports that the application, which was published on Thursday, reveals a potential future Apple charging system that could charge every device within a virtual charging area simultaneously, without the use of a charging pad or wires. In order to do so, however, consumers will require a next-gen iMac and upgraded peripherals. 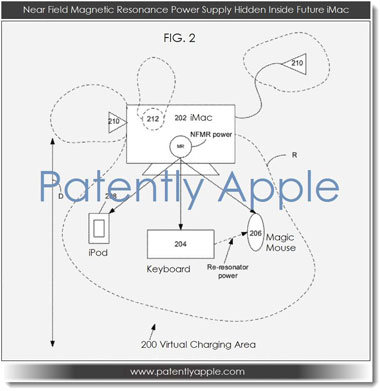 The patent description explains that the virtual charging area could extend to about one metre from a central station with an NFMR power supply such as an iMac.

That station could connect to to suitably configured peripheral devices such as a Magic Mouse, keyboard, as well as iPods and other mobile devices, sending power through an NFMR channel formed between the central station and an NFMR resonator circuit built in to the peripheral.

“In this way, when both the NFMR power supply and the NFMR resonator circuit are tuned to each other, then useable power could be transferred over a power conduction channel formed between the two resonant devices,” Apple describes.

Apple has patented wireless charging mats before, but NFMR technology could be a winning design for the company, eliminating the need for yet another wired device.