Apple has decided to improve the accuracy of its Maps software by re-arranging the physical features of the Earth. Or at least that’s what a satirical website has written.

Popular US humour site The Onion has stuck the boot into both the accuracy of Apple’s much-criticised Maps app and the ‘reality distortion field’ deployed by its executives with a spoof video news story. Apple, it ‘reports’, has decided to correct the numerous mistakes in the mapping software by rebuilding the Earth’s physical features, cities and landmarks to match.

“Apple has responded to continued frustration with its iPhone Maps application, announcing plans to realign the Earth’s geography to more accurately reflect the map software,” the Onion reporter deadpans.

It even quotes an imaginary Tim Cook. “Apple is committed to providing the best user experience possible…” he begins. “Which is why we are working to dismantle the Brooklyn Bridge and put London in Canada.”

iPhone owners used to the generally high level of accuracy in Google’s established mapping services were stunned when Apple launched its own rival as part of iOS 6 back in September.

Among the numerous blush-inducing errors: the presence of branches of long-defunct high-street chains, including Our Price and Woolworths; the misidentification of a farm as an airport; a set of disputed islands appearing twice in their entirety; and the total disappearance of Stratford-upon-Avon. 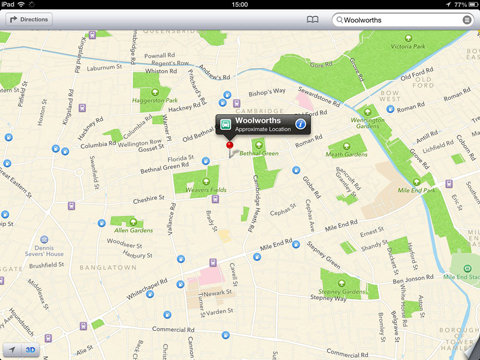 Step back in time: a curiously outdated reference on Apple’s Maps software. Picture courtesy of the Huffington Post

It would be tough for the Onion to top these sorts of slips, but it tries: reporting casually that Baltimore is being relocated to “the middle of the ocean”.

Although (back in the real world) a source at Apple insisted that the Maps application is 99 percent accurate, they acknowledged that the firm is to blame for the reception given to the software, which New York Times columnist David Pogue called “an appalling first release” and “the most embarrassing, least usable piece of software Apple has ever unleashed”.