Apple CEO Tim Cook has announced that the company is planning to manufacture one of its existing Mac lines exclusively in the US next year.

During an interview with Brian Williams for NBC’s ‘Rock Center’, which will air today, Cook revealed: “We’ve been working for years on doing more and more in the United States.”

The interview was Cook’s first TV interview since he took over as CEO of the company following the late Steve Jobs’ resignation in August 2011.

Cook didn’t reveal exactly which Mac line it will be manufacturing in America, or where, but several of Apple’s 2012 iMacs, which were released last week, were labelled as “Assembled in USA.” 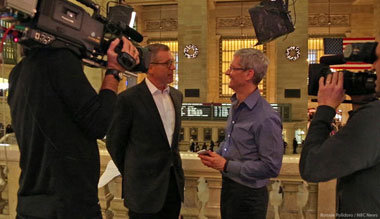 NBC notes that the move could have benefits for America, which has suffered some unemployment issues that could be resolve by the introduction of more factory jobs that were previously being sucked away by China and other lower-wage nations.

“When you look back up and look at Apple’s effect on job creation in the United States, we estimate that we’ve created more than 600,000 jobs now,” said Cook, referring to the US employees that work in Apple’s retail stores, research and development centres in California, data centres across the country and also third-party app developers.

Apple and its primary manufacturing partner Foxconn have been under fire this year following a string of suicides at their Chinese factories, which resulted in a fair Labor Association investigation to inspect the working conditions for employees there.

Cook explained that, while it might seem like an obvious option to move all of its manufacturing to the US, additional costs and lack of workers skilled in factory work that would cause a problem. Cook hopes that Apple’s introduction of the Mac project in the US might encourage other companies to do the same.

Apple confirms: ‘We are hard at work on the next version of Logic Pro’