Tim Cook last night gave his first official interview as Apple CEO to Brian William’s on NBC’s Rock Center, in the US.

In it Cook speaks candidly about his role as CEO, taking over the reins from Steve Jobs, working life, and Apple’s ethos towards his customers. Cook comes across as a humble, if slightly intense individual, who is happy to be heading up the world’s most valuable tech company.

Even though Apple is famously reticent about its future plans, Tim Cook did reveal that Apple planned to move its manufacturing process back to the United States at some point in 2013. It will initially assemble one Mac range (Cook did not reveal which one), which will bear the moniker ‘Assembled in USA’.

Tim Cook also talked reasonably candidly about the rumoured Apple Television project, and said that he was ‘intensely interested in building an Apple Television set. Stating ““When I go into my living room and turn on the TV, I feel like I have gone backwards in time by 20 to 30 years,” Cook told Williams. Although in typical Apple fashion he kept any specific details to himself “It’s an area of intense interest. I can’t say more than that.” 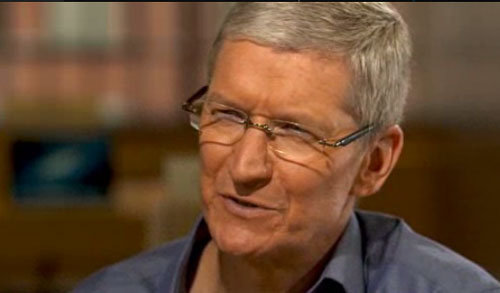 Cook also discussed, with some honesty, the problems Apple had with its new Maps service on iOS devices. “It didn’t meet our customers expectations, and our expectations of ourselves are even higher than our customers,” said Cook, “However, I can tell you — we screwed up — we are putting the weight of the company behind correcting it.”

On the subject of Samsung, Cook re-iterated his stance that he dislikes litigation intensely, but Apple wants other people to stop copying their innnovations. “We love our customers, and we’ll fight to defend them with anyone. Is it thermonuclear war? The reality is that we love competition at Apple. We think it makes us all better. But we want people to invent their own stuff.”

See also:  Tim Cook describes CEO transition with Steve Jobs: ‘I was surprised, I thought Steve was going to get better

On the subject of Steve Jobs Cook said “I always thought he would bounce back. Because he always did”.

Tim Cook also recently did an interview with Blomberg Businessweek, where he spoke in depth to Josh Tyrangiel. In that interview he talks about everything from what it’s like to work at Apple, being the most famous CEO in the world, dealing with Samsung, and Steve Jobs.

In the second part of the interview Tim Cook discusses further its manufacturing and offers some interesting asides about Apple’s approach to television.

“It’s a market that we see, that has been left behind. You know, I used to watch “The Jetsons” as a kid. I love “The Jetsons.” We’re living “The Jetsons” with this [iPhone]. It’s an area of intense interest. I can’t say more than that.”

It’s clear that Tim Cook won’t reveal exactly what Apple has planned for the Apple televsion, but his smile suggests that Apple is seriously planning something. And it’s something that he has confidence in.

Tim Cook compared the design and assembly process of Apple, and how it can be brought closer to home.

Throughtout the interview Tim Cook displayed the same ability to avoid questions about future products, and Apple plans. Although Cook ends on a great note that we think sums up Apple approach to product development, and helps explain why it is so secretive regarding product development:

“Our whole role in life is to give you something you didn’t know you wanted. And then once you get it, you can’t imagine your life without it. And you can count on Apple doing that.”

If we knew what Apple was doing in advance it wouldn’t be Apple anymore. It wouldn’t be the company that gives us things we never thought of, and then can’t imagine living without.