Tim Cook, in his recent television interview with NBC, hinted heavily that FaceTime will be the Apple Television’s killer feature.

When pressed about the Apple Television features, and if there was anything he could reveal about the future, Cook responded:

“You know I used to watch the Jetsons as a kid. I love the Jetsons. We’re living the Jetsons with this [points to iPhone]. It’s an area of intense interest. I can’t say more than that.”

What has the Jetsons got to do with the iPhone, or the Apple Television. The Jetsons, a 1960’s Hanna Barbera cartoon that was the space-age counterpart to The Flintstones portrayed a futuristic utopia, complete with elaborate inventions.

So what invention could Tim Cook be hinting at. Amongst the flying cars, hover chairs conveyor belt walkways, and robot contraptions was one invention that is key here: the television was used as a communication device. 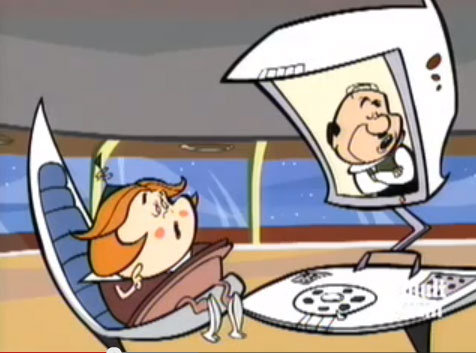 The Jetsons could frequently be seen talking to each other via television, instead of the telephone. It would seem natural in the 1960’s that two of the most popular inventions of the time: the telephone and the television, would converge into one device. But it hasn’t really happened in real life. Here at Macworld we think everybody can safely assume that it’s not the flying car, or robotic assistants that Apple is working on.

So what happened to the videophone? There were several attempts to create a videophone device, but none of them were truly successful. In fact, it took until VOiP technology became combined with home computers and webcams that chatting via video became truly popular.

Apple introduced video conversations to the Mac computer with iChat, although other systems like Skype and Windows Messenger have also been around. More recently Apple brought a new system called FaceTime to the iPhone, and you can now perform simple FaceTime videochats to just about anybody with an iOS device or Mac computer.

But not to your television. Being able to view and talk to people through television, either while watching a show (with the chat as a small window) or as a complete stand-alone full-screen chat would be a great feature.

Introducing FaceTime to the Apple Television wouldn’t be without its challenges. Unlike the iPhone you can’t direct the television camera directly to your face, but Apple has been working hard on face detection technologies, and the camera built in to the television could automatically adjust its position and focus in on wherever you (and other people) are in the room.

Would FaceTime be enough of a killer feature to warrant buying an Apple Television? Well that depends on how much you’d use it, but there are lots of people that seek video communication with far off loved ones, either overseas or too far to visit. And enough people use iOS devices to make FaceTime an immediately useful feature.

Tim Cook finished by saying: “Our whole role in life is to give you something you didn’t know you wanted. And once you’ve got it. You can’t imagine living without it.” Using a television as a communication device could quickly become such a feature.