Google has reportedly admitted that the Google Maps app for iOS, which launched in the App Store today, is better than Google Maps for its Android phones.

This morning, iOS 6 users were relieved to hear that the Google Maps app has been launched on iOS, and is now available free for iPad, iPhone and iPod touch from the Apple App Store.

The New York Times’ David Pogue wrote, in his review of the new app, “The brand-new, completely rethought design is slick, simple and coherent. Google admits that it’s even better than Google Maps for Android phones, which has accommodated its evolving feature set mainly by piling on menus.”

Pogue explained that, while Google Maps is an impressive app, there is not yet a way of downloading and storing apps for offline viewing, indoor maps or an iPad-specific app, but wrote: “Google says that goodies like those will be coming soon.” 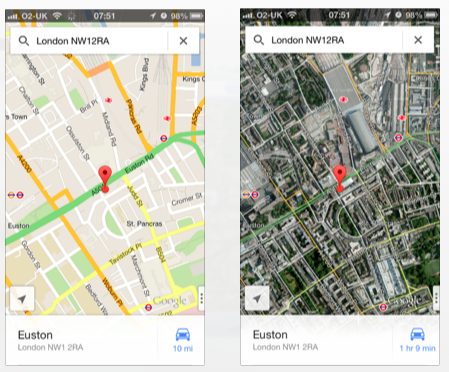 Apple introduced its own Maps app with iOS 6 in September, replacing Google Maps as the default mapping service. However, Apple’s Maps app was blasted for its flaws, which included inaccuracies, poor image quality, and more.

This led Apple CEO Tim Cook to offer a public apology in September to apologise for its mapping disaster, saying that the company was “extremely sorry” and suggesting that users should use alternatives such as Google’s Maps web app. He also recently admitted that Apple ‘screwed up’ with Maps during his first in-depth public interview.

Just this week, Australian police issued a warning to drivers advising them not to use Apple Maps because it had left several people stranded in a semi-arid national park where temperatures can reach 46C and there is no water supply.