Apple is expected to launch a lower-priced ‘iPhone for the masses,’ an analyst has said, despite new reports that suggest consumers are opting for Apple’s iPhone 5 instead of choosing the cheaper, older generations of the device.

Piper Jaffray analyst Gene Munster, who has recently said that Apple is ready to release a cheaper iPhone, dubbed iPhone mini, for Chinese and Indian markets, wrote in a note to clients on Monday that the launch of an “iPhone for the masses” by Apple is inevitable.

“We believe that the delta between smartphone market growth and iPhone growth will push Apple to release a lower priced device despite comments to the contrary,” Munster wrote. The analyst himself said earlier this year that Apple will “probably not” launch and iPhone mini, but has since changed his mind in favour of the cheaper iPhone. “Looking back historically, Apple always priced its Macs as the higher end of the market and ultimately the iPad, and now the iPad mini, became the ‘Mac for the masses’.” 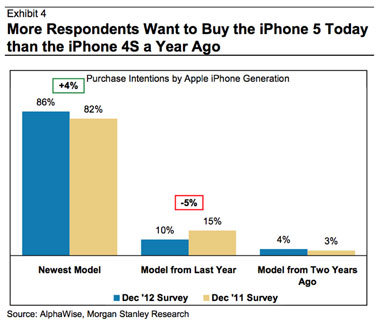 Munster thinks that Apple “needs” to build a low-cost iPhone to compete with cheaper Android devices that are gaining popularity in the smartphone market.

But Munster’s predictions come just as research from Morgan Stanley and AlphaWise has found that the majority of those planning to buy an iPhone would opt for Apple’s iPhone 5, the most expensive choice.

The survey of more than 1,000 US smartphone buyers found that 86 per cent of respondents are planning to buy an iPhone 5, up from 82 per cent in December 2011.

A total of ten per cent of the respondents said that they plan to buy the iPhone 4S, which Apple is selling for £80 less than the iPhone 5. That’s down five per cent from last year’s survey.

Meanwhile four per cent said that they would choose the iPhone 4, priced at £210 less than the iPhone 5. That’s an increase of one per cent from last year.

These results indicate that consumers are willing to cough up the extra cash for Apple’s latest iPhone, which may not bode well for the cheaper iPhone Munster has been predicting.

Analyst Katy Huberty suggests that the rise in consumers planning to buy the latest iPhone could be down to the iPhone 5’s redesign, something that the iPhone 4S lacked when it launched with the same exterior design as the iPhone 4 last year.

The AlphaWise and Morgan Stanley survey also found that iPhone owners are most likely to buy another Apple smartphone, with the higher retention rate from its competitors.

Rumours of an iPhone mini have been circulating for quite some time. It does seem likely that Apple could one day make a cheaper, smaller, lighter and more accessible iPhone; after all it made the iPod mini, iPad mini, and the Mac mini too.