One of the faces on this year’s billionaire index is Mrs Jobs – the Late CEO of Apple, Steve Jobs’ widow, Laurene Powell Jobs. She is profiled on Bloomberg TV in a video which asks “Who is Lauren Powell Jobs”.

The 49 year old is worth $9.9 billion but says her “Relationship with money is a tool to be self-sufficient but it’s not something that’s part of who she is”.

She has degrees from Wharton and Stanford Business School, and, “incidentally that’s where she met Steve,” says the narrator: “Going out of her way to sit next to him at a seminar he was leading.

Laurene has inherited her late husband’s entire stake in Apple, according to Bloomberg. Despire the recent troubles on the stock market, Jobs’ wealth has soared by 25% this year (sounds like a prime target for those expected Capital Gains Tax increases everyone is trying to avoid). 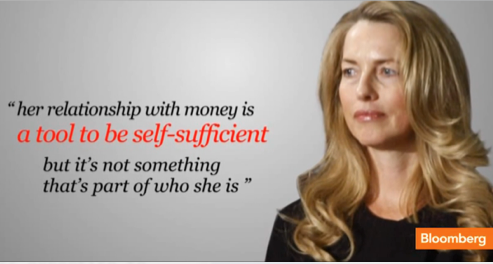 Laurene’s stake in Disney, handed down from her husband who was given it as part of the sale of his other company, Pixar, is “more than twice her Apple share,” according to the report.

A mother of three, Laurene has “put her business expertise to use,” standing on the boards of Teach For America and New Schools Venture Fund

Steve Jobs ‘was never embarrassed about working hard, even if the results were failures’ – sister