One great thing that occurred due to Apple removing Google Maps from iOS, and it then returning as a stand-alone app is that we now have not one, but two really great mapping apps that both offer turn-by-turn (or Sat-Nav) functionality.

Although this can be used on foot, or public transport, Turn-by-turn technology really comes into its own when you’re driving a car.

There have been sat-nav apps on the app store for a while now, although apps such as Tom Tom start at £26.99 and then you have to pay £2.49 for a month’s TomTomHD trafic and £14.99 per year for speed camera support.

Both Google Maps and Apple Maps have a broadly similar layout. You navigate by entering an address or postcode, or by tapping and dropping a pin onto a location on the Map.

In Google Maps you then tap the red pin, tap the Car icon at the bottom, choose from one of three results (it lists just the time that each takes and a via option). You can then visually see the route on the map, and tap to view one of the other route then tap Start. 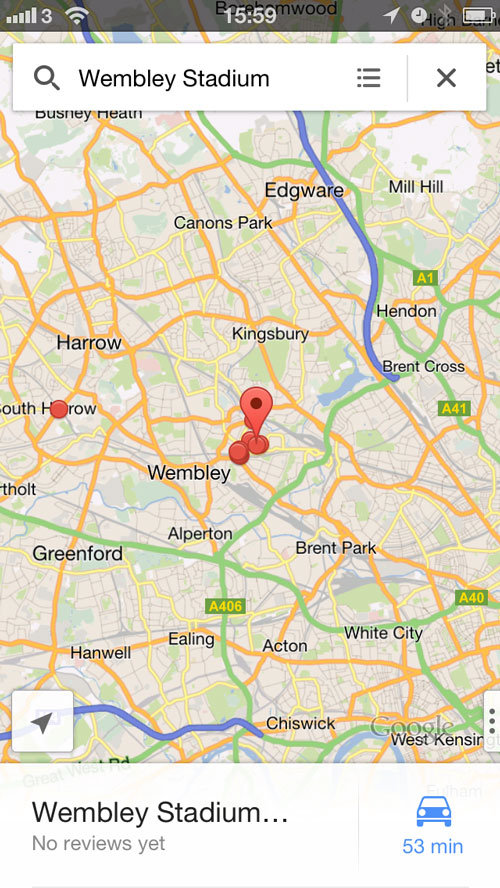 Apple Maps works in a similar fashion. Enter the name or tap on the map to drop a pin, tap on the pin and tap the Green car icon that appears. Alternatively you can tap on the Directions icon and enter Start and End locations.

Apple Maps also gives three route suggestions, but it defaults to showing them on the map itself, so you choose visually which way the route is attempting to take you. You can tap the List icon to view the complete road directions as well. At the top you get more information regarding the distance and estimated journey time.

When the journey is underway both Maps turn into a quasi-3D mode showing your car and the road ahead. Both Google maps and Apple Maps show upcoming information (turns, traffic junctions, roads) in boxes at the top of the map. 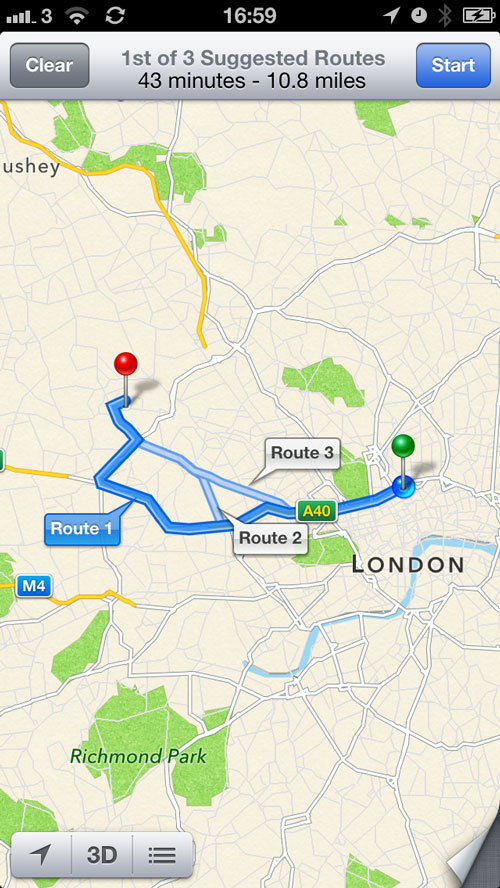 Google’s in a green box, Apple in a blue box. There’s really not much in it but we found Apple’s maps a little clearer and easier to use when driving, the icons are larger, bolder and there’s less clutter. The Apple Map does seem to zoom further in to our eyes, which is a good and bad thing – it helps that Apple maps has the clearer boxes indicating what’s coming next. The cartography on Apple Maps is also a little cleaner than Google Maps (although it’s easier to identify A roads in Google Maps).

It turns out that Siri enunciates clearly, professionally, and calmly. And by God does this make a difference when using it to drive around. We found that we didn’t need to focus so much on the screen, and examine upcoming directions visually as much in Apple Maps. 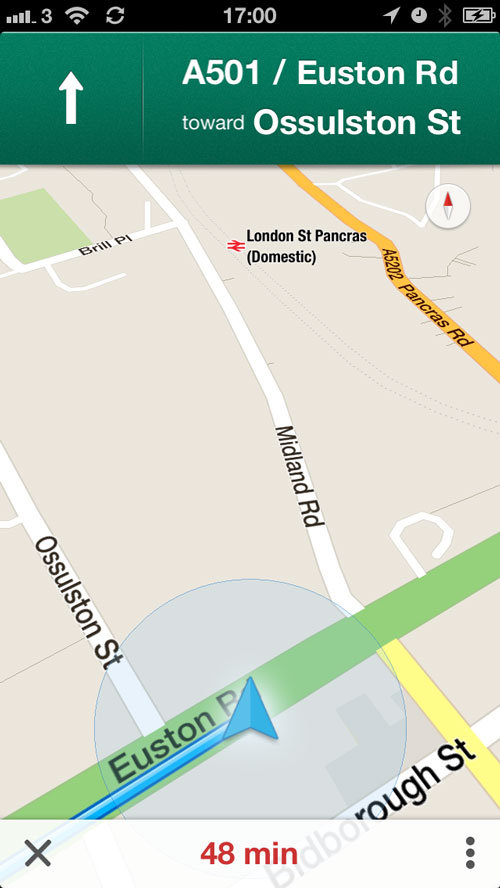 Google Maps’ voice enunciation sounds like the Stephen Hawking impression as done by Steve Coogan. Honestly, it’s terrible. We can’t quite fathom why as Google has pretty good voice enunciation on its Google Translate website.

The ability of the iPhone to clearly give instructions in Siri’s voice makes a real difference to the driving experience.

We tested out Google Maps and Apple Maps in South London navigating from Landmarks (petrol stations, local clubs, train stations, and so on). To be honest we had few complaints with either service, both delivered consistent service.

We tested with an iPhone 5 connected to the Three network and at no point did either Map lose a connection or lose its ability to continue serving up roads. Both are clearly caching plenty of data, as we went through several dark connection patches and it happily kept serving up the maps. 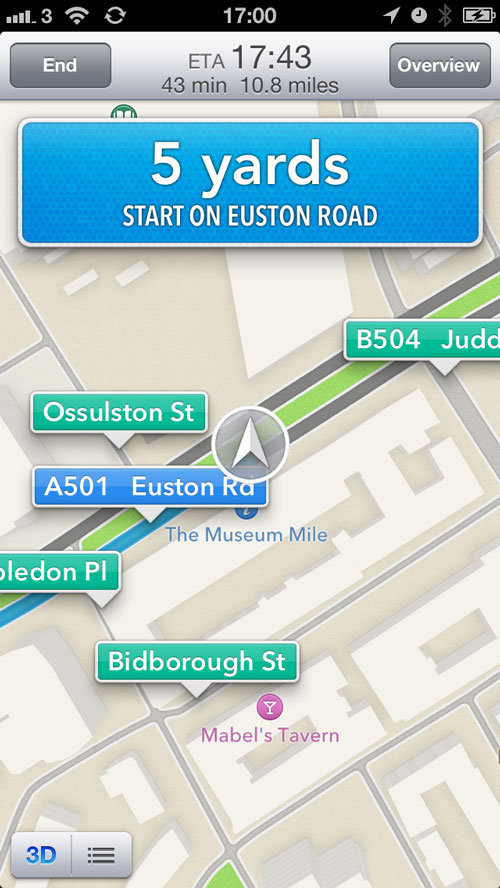 This is the a fairly fundamental one, so it’s something that we’re glad to see working across the board.

The good news is that Apple Maps is powered by TomTom so – barring a few highly publicised glitches – it’s Maps are up-to-date, and we found them perfectly accurate. Google Maps also struck us as having its Maps completely in order (in South London, at least).

Both Maps seemed perfectly competent at providing accurate results from addresses and postcodes.

Although both have a good selection of petrol stations, supermarkets, transport hubs, car parks, and so on. The things you’re more likely to be looking for.

Apple has crowd-sourced road-work information, though. Which seems to be a bit of a big oversight on Google’s part. Knowing which roads are being worked on can make all the difference when driving around.

Even so, we think Google Maps simply has the edge on accuracy. And this is And this is a pretty big thing in a turn-by-turn map app.

Both Google Maps and Apple Maps lack GATSO traffic camera warnings, which is a major downside. However, as the other rival apps Tom-Tom and Navigon are both now charging monthly or yearly for GATSO alerts. We’d also like to see more information on danger-spots, the sort provided by Road Angel. It seems odd to us that Apple and Google can crowd-source traffic information, but not safety information.

After testing out Google Maps against Apple Maps, we’ll call for Apple Maps. It’s a lot cleaner, and easier to use when driving around. Although it’s interesting that Siri is the technology that we feel makes a real difference here, and that’s just because it’s good at explaining where you are and should be going – we think Siri will become even more important when it starts to really get a handle on interacting with you.

At least when it comes to turn-by-turn navigation. Although we think Apple will have a job on convincing people to use Apple Maps rather than Google Maps after its highly publicised problems.