ForeSee’s annual Holiday E-Retail Satisfaction Index found that Apple’s customer satisfaction rate was 80 out of 100 for its online store in 2012, down from 83 per cent from the previous year and the lowest it has been in four years.

The data is based on more than 24,000 customer surveys collected in the US by ForeSee during the Christmas shopping period, which aim to measure the customer satisfaction rate of the top 100 online stores.

ForeSee boss Larry Freed told Reuters that customers found that Apple’s online store has become more difficult to navigate this year, what with the introduction of several more products including the iPad mini, and that improving the site’s functionality would help boost Apple back up the customer satisfaction charts. 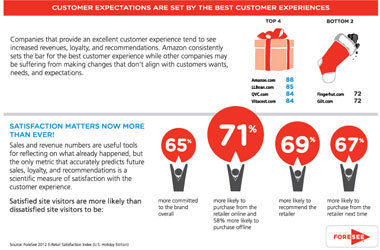 Apple was in second place in ForeSee’s 2011 customer satisfaction survey, but failed to make the top five online stores in 2012, coming in 14th place in a tie with sites including Netflix.com.

“At this point, Amazon has been dominant for so long and has such a history of focusing on the customer, its hard to imagine anyone else coming close,” Freed continued. “Companies should emulate Amazon’s focus on the customer, which is clearly linked to superior revenues over the years.”