One woman got more than she was expecting when she unwrapped her iPad this Christmas, opening the box to discover an engagement ring inside instead of Apple’s tablet.

Reddit user rad_rob revealed his proposal plans on the site, posting a gallery of photos showing how he made the fitted and weighted aluminium plate and engraved it with the words ‘will you marry me’.

The lucky lady accepted the proposal, and, in case you were wondering, she got the iPad too.

In an update posted on Reddit, rad_rob wrote: “She opened it, and was super excited about getting an iPad. She decided she wanted to use it immediately so she started opening it. I put some clear plastic stickers on the box since I couldn’t find a place to shrink wrap it for me.” 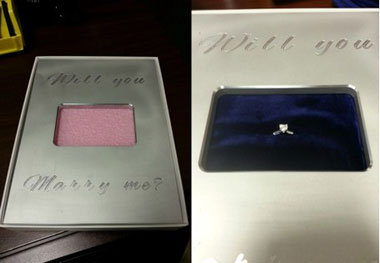 “As I was helping her with that, I got down on a knee,” he continued. “After that, it was pretty much all blank… she immediately said yes.”

“Shortly after that, I gave her her other gift, which was the iPad, and assured here there actually was an iPad in this one.”

Apple’s returns policy most searched for on Christmas Day – report