An interactive memorial has been unveiled in Russia this week to remember Apple’s late co-founder Steve Jobs, who died in October 2011.

The memorial, which is designed to resemble a giant iPhone, displays a slideshow of high-resolution photographs of Jobs that span his career at Apple, reminding visitors of some of his biggest achievements as head of the company.

The slideshow is accompanied by captions shown in various languages to explain details of key moments in Jobs’ life. The display allows visitors to select particular parts of the visual biography that they wish to view.

The memorial has been put up in the courtyard of the St. Petersburg National Research University of Information Technologies, Mechanics and Optics, and also has a QR code on the back for visitors to scan with their smartphone to be taken to a commemorative Steve Jobs website. 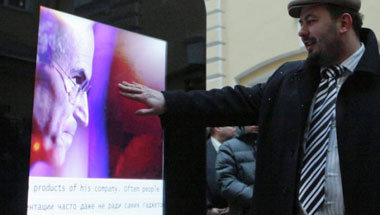 The Next Web reports that the design of the memorial was decided following a competition held by Progress IT Fund, which had more than 200 submissions. The winning design was by St Petersburg local Gleb Tarasov, who has apparently named the memorial ‘Sunny QR Code’.

A movie depicting Steve Jobs’ life from 1971 to 2000 starring Ashton Kutcher is set to arrive in cinemas in April, and a separate film based on Walter Isaacson’s biography of Apple’s co-founder is in the works at Sony.

Detailed Steve Jobs figure set to ship this month, but will it get banned?