Eagle-eyed Apple website 9to5Mac has noticed that Steven Sinofsky, who left his job as president of the Windows division at Microsoft on 12 November last year, was already tweeting from an iPhone by 4 January, less than two months later.

It’s perhaps understandable that Sinovsky shouldn’t feel excessively loyal to Microsoft technology after leaving under a little bit of a cloud (it has been speculated that he lost a power struggle with Microsoft boss Steve Ballmer), but till embarrassing for Microsoft that such a leading exponent of Windows mobile products, including the Microsoft Surface tablet, should jump to iOS so soon.

(To clarify, he doesn’t seem to have completely switched, however. He still seems to tweet from a mixture of iOS and Windows platforms.) 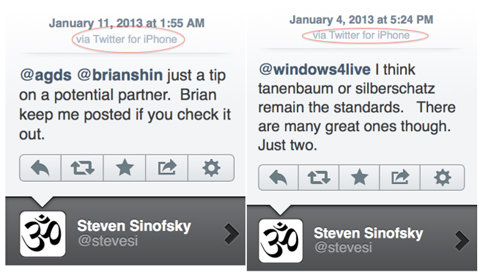 This morning (last night in Las Vegas, we guess), Sinovsky commented on the matter on Twitter:

“Sure I use an iphone at times. I have a Samsung too that i use. I want to be familiar with the work of all companies.”

Is it more or less embarrassing that when ‘Microsoft Surface fan’ Oprah Winfrey tweeted her praise for the tablet from an iPad? Hard to say. As the man himself points out, it’s quite understandable for those who work in the tech business to keep themselves familiar with all platforms. But the key thing is the timing: it hints that Sinovsky would have liked to use iOS while at Microsoft but wasn’t allowed to.