Apple Insider’s report notes that the technology would allow parents to limit their child’s ability to spend money via an iPhone. Given the influx of reports of parents discovering that children have run up massive bills thanks to expensive in-app purchases, this would appear to be a good move.

The patent describes an E-Wallet app with a primary account that is tied to a credit card. The user is able to use the app to conduct transactions via their iPhone.

The key feature described in the patent filing is the fact that the user can add subsidiary accounts to their E-Wallet app. For example, an account can be set up for the kids with a controlled spending limit. 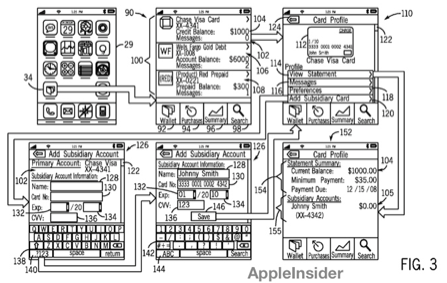 Apple also notes an example where the application could stop a user from purchasing alcohol or tobacco, notes Apple Insider.

The filing also indicates that a future iPhone could have an integrated near-field communication chip (NFC).

It is unlikely that the app will actually be called E-Wallet as there is already an E-Wallet app available for the iPhone. That app, from Illium Software, is described as a password manager and secure storage database wallet. When Macworld US reviewed version 7.1.3 of that app it gave it 3.5 stars.

One concern with NFC is that monetary transactions via an iPhone may not be completely secure. Apple is believed to be looking into way to address this. For example, a report earlier this week suggested that Apple could be planning to introduce a built-in fingerprint sensor to its next-generation iPhone later this year. The fingerprint technology could be used to with Apple’s iOS 6’s Passbook, which has been a cause of concern for some who think giving the user easy access to tickets, loyalty cards, coupons and passes is a security risk. If the iPhone required fingerprint recognition in order to unlock apps such as Passbook, or verify payments, that security risk could be significantly reduced.

Speculation that Apple is working to add a fingerprint sensor into its products sparked in July last year, when Apple acquired AuthenTec, a Delaware-based company that specialises in security systems such as fingerprint scanners.