As Apple’s popularity rises, so does the amount of fake Apple products, including iPads, iPhones, Macs and even Apple Stores. So when a shipment of fake iPhones was discovered in Russia earlier this year, authorities decided to capture the moment that the devices were destroyed on camera.

The video shows 127 very convincing fake Chinese iPhone 4 and iPhone 4S devices being crushed by an excavator in a scrapyard in the Amur region of Russia. Traditionally, fake devices can look very similar to the real thing, but customers will soon discover flaws in the product.

According to EnglishRussia, a Chinese man tried to smuggle the phones, worth an estimated total of $36,500 (£23,000) into Russia, and didn’t have any documents to prove that they weren’t fake, resulting in the destruction of all of the devices. The man is believed to have been given a $65 fine and sent on his way.

The report claims that the fake iPhones were destroyed by the police in the presence of witnesses and representatives of the court. Once the phones were crushed to a satisfactory level, they were burned. Let’s hope they really were fake… 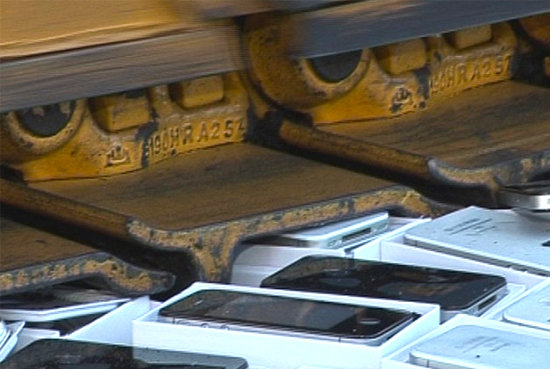 In 2011, counterfeit Apple Stores began popping up in China, many using the official Apple logo and in some cases the name ‘Apple Stoer [sic]’. Almost 30 fake Apple stores were discovered in China altogether, and were subsequently closed by authorities.

But some fake Apple products are much less convincing, with unlucky customers falling for cons that leave them out of pocket.

In November last year, an American woman purchased a $200 iPad that turned out to be an iPad-shaped mirror, and in early 2012, as many as 10 fake iPad 2s that were actually made of clay were sold to unwitting Canadians.

Check out the ‘Destruction of Counterfeit iPhones in Russia’ video below: