Sergey Brin, Google’s Co-Founder has taken to walking around in public wearing Google Glass, Gioogle’s augmented reality eyewear that is currently in development.

Brin is known to run Google X, the part of Google responsible for developing future projects. Google Glass is a new augmented reality technology that combine the features of a smartphone with a heads-up style display integrated into eyewear. Essentially it display computer information in front of your eyes as you walk around. The headset was known as Project Glass within Google.

Augmented reality glasses are said to be one of the next big trends in computer technology, and although they sounds quite futuristic – Google is already seeding prototype Google Glass kits to developers, and is clearly now testing them out in public.

The Google Glass headset is reasonably unobtrusive, and Brin isn’t wearing the oversized eyewear you might expect. They look like a regular pair of sunglasses, although in his beanie hat and leather jacket he looks a little more “Matrix” than most people might want to appear.

Apple is also said to be working on prototype eyewear and has taken out patents in this area, although nothing is known about Apple’s intentions in this area other than rumours or speculation. Apple is unlikely to be performing field tests at all, and certainly wouldn’t be doing so publicly.

Google has shown off Project Glass before, Sergey Brin wore them last year to an event for the blind in San Francisco.

The photograph was taken by passenger Noah Zerkin who recognised Brin and posted the image on Twitter. Zerkin commented that he himself was a “wearable computing and augmented reality enthusiast/hardware prototyper,” but told Twitter that he had got into the same subway carriage as Brin by coincidence. He said he had had had “a brief conversation with the most powerful man in the world. On the downtown 3 train. Nice guy.” 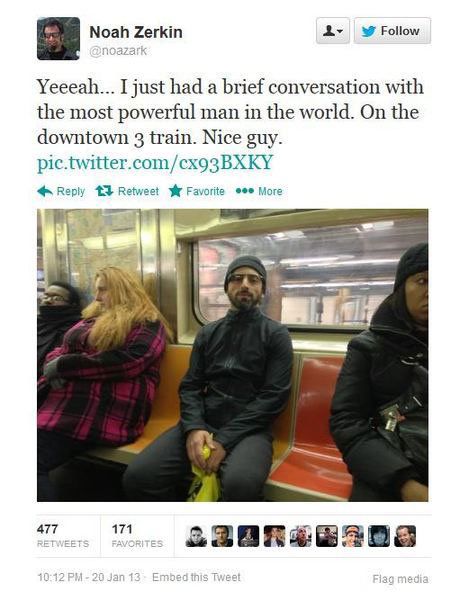