The one minute-long clip from the jOBS movie, which is set to arrive in cinemas on 19 April, shows Kutcher as Steve Jobs talking with Wozniak, played by Josh Gad.  During the scene, Wozniak reveals that he can create a personal computer with an operating system that allows information to be displayed on a screen, but he tells an excited Steve Jobs: “Nobody wants a computer.”

However, the Steve Wozniak himself has reportedly said that the scene is “not close.”

“We never had such interaction and roles,” Wozniak said in a comment on a Gizmodo story. “I’m not even sure what it’s getting at… personalities are very wrong although mine is closer… don’t forget that my purpose was inspired by the values of the Homebrew Computer Club along with the ideas of the value of such machines and Steve J. wasn’t around and didn’t attend the club so he was the one learning about such impact of the future.” 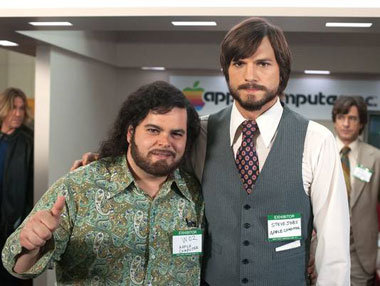 Then, in an email sent to Gizmodo on Thursday, Wozniak wrote that the clip is “totally wrong.”

“Personalities and where the ideas of computers affecting society did not come from Jobs,” he said. “They inspired me and were widely spoken at the Homebrew Computer Club. Steve came back from Oregon and came to a club meeting and didn’t start talking about this great social impact. His idea was to make a $20 PC board and sell it for $40 to help people at the club build the computer I’d given away. Steve came from selling surplus parts at HalTed he always saw a way to make a quick buck off my designs (this was the 5th time).”

“The lofty talk came much further down the line,” he added. “I never looked like a professional. We were both kids. Our relationship was so different that what was portrayed. I’m embarrassed but if the movie is fun and entertaining, all the better. Anyone who reads my books iWoz can get a clearer picture.”

Wozniak’s reactions may come as a surprise to Kutcher though, who told Entertainment Weekly: “I don’t think that this movie is trying to paint [Jobs] in any light other than a realistic one. I think Steve Jobs and ultimately Steve Wozniak would give this their stamp of approval.”

Also speaking to EW, Josh Gad said that he did read iWoz before filming as Steve Wozniak, and that he also read Walter Isaacson’s offical Steve Jobs biography.

If Wozniak had all that to say about one minute of jOBS, it’ll be interesting to find out what he thinks of the rest of the film, which will be premiering as the closing film at the Sundance Film Festival on Sunday.

jOBS, not to be confused with Sony’s movie adaptation of Walter Isaacson’s Steve Jobs biography which is expected to arrive later this year, depicts Jobs’ life from 1971 to 2000, and also stars Matthew Modine as ex-Apple CEO John Sculley, Giles Matthey as Jony Ive and Ahna O’Rielly as Jobs’ ex-girlfriend Chis-Ann Brennan.