An Apple patent for a cheaper iPhone mini with a plastic-body was published by the US Patent Office. The patent suggest that Apple is looking to move away from the aluminium case of the iPhone 5, and toward’s a cheaper plastic case for a future iPhone.

It is likely that this patent relates to development of a cheaper iPhone mini model, expected to sit alongside a more expensive iPhone model.

The patent for Apple Inc. (US 8,364,032, “Light isolating protective cover for small form factor electronic device”) describes an iPhone with a plastic cover.

“A portable device has a rear facing camera assembly and a front facing display assembly that includes at least a protective cover layer, a display stack that includes a plurality of display components arranged in a plurality of interconnected layers, the display stack providing an imaging service, and a flat support chassis arranged to provide support for the display stack. In the described embodiment a protective cover can wrap around and protect at least the rear portion of the portable device without adversely affecting an image capture process carried out by the rear facing camera assembly.” 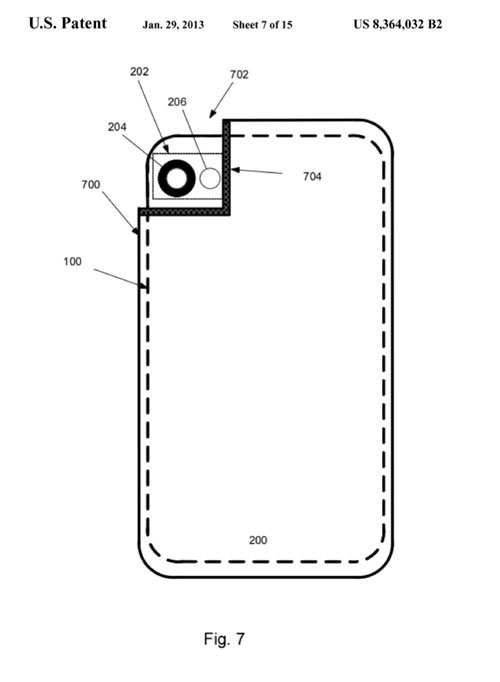 The patent provides more fuel for the rumour that Apple is working on a cheaper iPhone mini, in the same vein that it produced an iPad mini.

Despite many customers looking for cheaper iPhone models, Apple is hardly struggling to sell the current iPhone. Despite poor predictions from analysts, Apple posted its best ever financial results in the first quarter of 2013, with record iPhone sales. Apple announced that it had sold 47.8 million iPhones in the quarter, compared to 37 million in the year-ago quarter.

Apple’s market strategy so far has been to introduce new iPhone models on a yearly basis, with older models filling the cheaper gaps in the market. So user can currently purchase an iPhone 5, iPhone 4S, or iPhone 4 from Apple. This patent suggests that Apple is exploring cheaper alternatives to the current iPhone model, but does not confirm that Apple is intending to put the iPhone mini into production

Having said that, Apple is also in a clearly dominant position in the iPad market, and introduced a cheaper iPad mini during 2012. It also followed an iPod mini and iPod nano strategy that saw its iPod remain the dominant music player for many years. It may well be that Apple has decided to move ahead with a new strategy that sees a cheaper iPhone mini model sit alongside the main iPhone.