A new Apple patent application indicates that Apple could be working on new depth perception technology that would enable future devices to capture better photographs, and could be used to introduce virtual keyboards.

The patent application, which was published by the US Patent and Trademark Office on Thursday, covers a “Depth perception device and system” which can determine the distance to an object or the depth of an object using a combination of image capturing sensors and lasers

Apple explains that depth and distance determination may be useful for many devices, including computers and mobile devices such as the iPhone, which is mentioned in the patent by name. “For example,” says Apple, “cameras may produce better images based on depth data of an object, as a lens of the camera may better focus on an object when the object’s depth is known.”

The patent also highlights the benefits of depth perception for improving the accuracy of auto focusing. 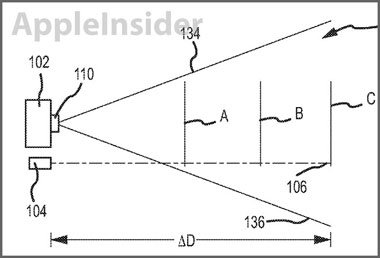 To determine depth and distance, Apple’s invention uses a fan shaped laser beam to intersect at least a portion of a field of video of the camera. This laser beam will be reflected back towards the camera if it encounters an object. “This light reflection allows for an intersection point between the beam and the object to be determined,” says Apple’s patent overview. “The image capturing device then may capture an image of the laser beam as projected into the field of view. The captured image may then be analysed to determine the depth of an object within the field of view.”

In addition to the image capturing purposes, Apple’s invention could also be used for a variety of different embodiments, including a movement sensor and a virtual keyboard or control panel.

The depth perception technology could sense when a person is approaching the computer to automatically wake from sleep more or launch an application.

It could also be used “in combination with a projected control panel (such as a keyboard, audio/video controls, and so on),” notes Apple. This control panel would be projected onto a surface with different light shapes or colours to represent different inputs.

This means that a device could determine the selection of a particular button or input of the control panel by determining the depth of a user’s finger, a stylus, or other input mechanism.

Apple says that the laser beam could be either visible or invisible to the user, depending on its purpose. It could be used in a variety of devices, including computers, mobile devices, digital cameras, and also security systems and cars.

The depth perception system patent application credits David S. Gere as its inventor, and was originally filed on 28 July 2011.