In a patent application published on Thursday, Apple describes a sound system that could be launched as part of Apple’s iTV. The intelligent system could determine where a user is in a room, and if they are not within the optimum range, the processor could modify the audio output, says the application. It could also adjust based on which way the user is facing, and the environment that the user is in.

Apple says that the invention could take the form of a system for providing an enhanced audio experience for laptop, tablet, smartphone, and television users, for example, reports Apple Insider.

The system could also be used for advanced video conferencing, a feature that has already been rumoured to be on its way with the iTV. The user could participate in a FaceTime call that would be able to use the audio system to make voices from various participants sound as if they are coming from the direction they’re positioned on the screen. 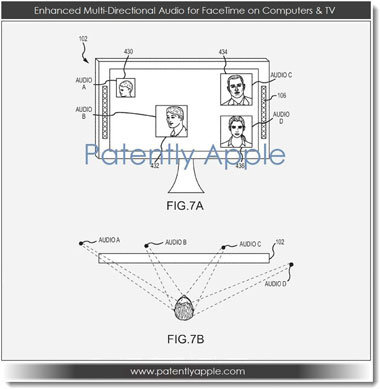 Apple’s patent also explains that an image processing unit within the audio system could use face recognition and eye tracking to also help improve audio quality during FaceTime calls, enabling the microphone to be directed towards the speaker’s mouth automatically.

It is currently unknown whether Apple will implement this enhanced audio system in a future product, but new reports suggest that the company is currently working on three television sets of different shapes and sizes, two of which are ready to enter production.

The reports come from Chinese website DFDaily, which cites a source who claims to have seen three models of the ‘iTV’ at Apple’s headquarters. One of the models is apparently an entry-level model with a Retina display measuring about 13 to 18 inches. This model could launch as early as May, says the report.

The second model is 50 inches and has a flexible display, say the sources. This would be the flagship Apple iTV.

The third model would fall in between the two previously mentioned televisions, but no technical specifications have yet been disclosed.

The reliability of the source is questionable, of course, but DFDaily claims that he “has a close cooperative relationship with Apple.”

Speculation about an Apple television set has been circulating since as far back as 2009, and has increased recently following Apple CEO Tim Cook’s admission that TV is an ” area of intense interest” for the company. During Apple’s earnings call last week, Cook said that Apple has “a lot it can contribute to this space.”

While some experts and analysts have predicted that Apple will choose to focus on developing the Apple TV set-top box further, Piper Jaffray analyst Gene Munster still insists that an Apple television set with a new remote will be launched this year.