Apple has been blamed for the potentially dangerous flaws found in the FireReady bushfire information iOS app.

The Country Fire Authority in Victoria, Australia, has said that it has been forced to use Apple Maps in the FireReady app, which aims to alert locals and travellers to nearby bushfires and emergencies, but that the maps are inaccurate. “Macedon and a number of other Victorian towns are located incorrectly,” CFA told The Age.

“Users reports that towns are located on their maps at the centre of the district rather than on the actual township itself,” said a CFA spokesman, who claims that, in response to its complaints, Apple simply advised CFA to report inaccuracies via the Apple Maps app.

“CFA will continue to raise its concerns with Apple Australia, and so should users experiencing the issue,” the spokesman said. “We would advise FireReady app users with iOS 6 installed on their devices to disregard Apple Maps township locations and instead focus on the street names and the location of incidents and warnings in relation to their GPS location.” 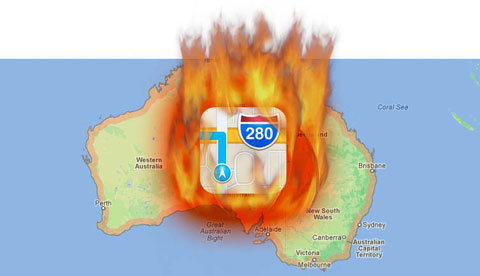 This is not the first time iOS users have been warned against relying on Apple’s Maps in Australia. In December, Australian police warned people not to rely on the app after several motorists became stranded in a scorching hot national park with no water supply.

Earlier this month, new job listings revealed that Apple is looking to hire at least 10 new software engineers to join its iOS Maps team. These job listings follow promises from Apple CEO Tim Cook that the company is working non-stop to improve Maps, and is putting its weight behind correcting the service.

When Apple introduced its new Maps with iOS 6 in September, it was greeted by wide criticism, which led Cook to issue a public apology and admit ” we screwed up”.

Cook said that Apple’s Maps would improve with time as users reported problems, but advised users to turn to Microsoft’s Bing and Google’s Maps, or other mapping services in the meantime.

Many iPhone, iPad and iPod touch users decided not to update to Apple’s iOS 6 when it was first launched, due to the criticism the Maps app had received. So, when Google Maps became available in Apple’s App Store in December, it was downloaded more than 10 million times within 48 hours, and sparked an iOS 6 adoption boost of 29 per cent.