Apple has won a new patent covering “microslot antenna” technology that could enable the next iPhone, iPad or MacBook to be thinner, or could leave more space within the device’s housing for internal components. The technology could also allow Apple to make an all-aluminium iPhone.

Apple Insider reports that the patent, which was granted to Apple by the US Patent and Trademark Office on Tuesday, describes technology that would allow antenna assets just a few microns wide to be integrated into housing of an iPhone, or other portable device such as a MacBook, making then almost invisible to the user.

The iPhone 5 has two antennas that are fitted into the handset’s thin body. Removing the need to allocate space for internal antennas would allow for more compact devices, but could also enable Apple to use bigger components such as a better battery, or additional components to bring new features to the product.

TechCrunch notes that the new patent hints that Apple could be working on an all-aluminium body for the next iPhone. With the iPhone 5, Apple has been forced to include glass ‘windows’ on the top and bottom of the device, and with the iPad, Apple has included a black bar to allow 3G connectivity. The microsolot antennas would remove the need for these elements to allow for a completely aluminium design, reminiscent of Apple’s MacBook lineup. 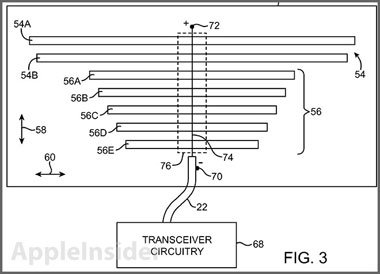 The patent was originally filed back in 2007, six months after the original iPhone was launched, so it’s likely that the antenna technology isn’t easy to implement in Apple’s devices, or that it posed further problems for the company that need to be resolved. However, the patent shows that Apple is interested in ways of improving the aesthetics of its antennas in future products.

iPhone 5S and iPhone 6 spotted at Apple suppliers, both to launch this year – report