Ex-Apple executive Craig Elliot, who is now the CEO and co-founder of cloud networking start up Pertino, has told the story of the day Apple’s late co-founder, Steve Jobs, gave him a Porsche.

Speaking to Business Insider, Elliot explained that in 1984, at the age of 23, he was working at his local computer shop when the Macintosh came out. “I sold more Macintoshs than anyone in the United States,” he said, which led to him receiving a letter from Apple asking him to visit Cupertino, California.

“I had dinner with Steve Jobs, spent a week with the Apple executives and Steve gave me a Porsche,” said Elliot, who remembered that the dinner got off to a rocky start when Jobs asked how many Macs he had sold. When Elliot replied with 125, Jobs wasn’t too impressed.

“I leaned over and said, ‘Steve, remember, I’m your best guy’,” Elliot described. “Jobs said, ‘Oh, you’re right.’ And for the rest of the dinner we had a really nice time.”

Elliot went on to work at Apple for more than 10 years as the head of Apple’s internet and ecommerce business, during the time when Steve Jobs wasn’t running the company. When Jobs returned, Elliot went to act as CEO for networking startup Packeteer, which he later sold for $269 million.

Below if a photo of Elliot with Jobs in 1984, along with his brand new Porsche. (Credit: Pertino) 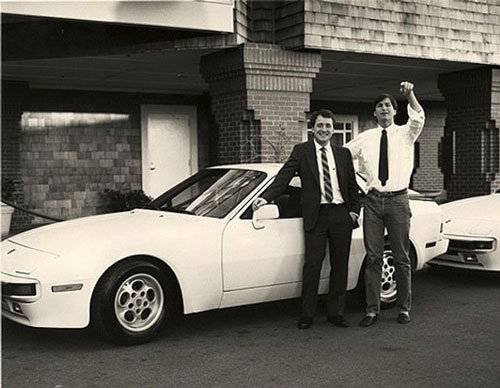