Google Glass, the new wearable headset computer inside your glasses is making waves in America at the moment. Google has allowed journalists to review Google Glass, and write about what it’s like to have your computer display in front of your eyes.

The Google Glass UK availability hasn’t been announced yet, and customers have to enter a competition to buy one in the US, but interest is high so while we’re waiting for it to arrive let’s take a closer look at it and some Google Glass reviews.

What is Google Glass

What once seemed like the science-fiction, has become science-fact remarkably quickly. Google Glass, aka Project Glass, is a small lightweight pair of clear glasses with built in heads-up display and voice activated controls. You can use it to record video, take photographs, share what you’re looking at, talk to (or ‘Hangout with’ as Google says) friends, get directions, hear and send messages, get information and do Google do Google searches. In short: rather a lot. Google Glass

Google recently released this How it Feel Video that shows what it’s like to wear Google Glasses.Google Glass Review

The Verge is the first major publication to run a hands-on test of Google Glass. Joshua Topolsky, The Verge says “The design of Glass is actually really beautiful. Elegant, sophisticated. They look human and a little bit alien all at once … This is Apple-level design.”

“Controlling Google Glass might take a bit of getting used to. it’s a two-step process. First you have to touch the side of the device (which is actually a touchpad), or tilt your head upward slowly, a gesture which tells Glass to wake up. Once you’ve done that, you start issuing commands by speaking “ok glass” first, or scroll through the options using your finger along the side of the device.”

In terms of interaction, Google Glass is said to be remarkably similar to what Google shows in its video (above). Topolsky says “That’s not CGI — it’s what Glass is actually like to use.

Hedge Fund manager Eric Jackson was somewhat more reticent after talking to an unamed VC who’d tested Google Glass. Jackson said on Twitter “Google Glass isn’t quite the miracle drug its made out to be: “VC told me this week — who’d tried it and knows many people who have — Google Glass actually is not very good at the moment, gives big headaches.”

Aside from the visual impact of wearing a display in front of your eyes, there are some concerns about interaction. “The natural language search works most of the time, but when it doesn’t, it can be confusing” says Topolsky, “leaving you with text results that seem like a dead-end. And Glass doesn’t always hear you correctly, or the pace it’s expecting you to speak at doesn’t line up with reality.”

See: The Complete list of things to ask Siri in the UK

So it’s like Siri, then, really impressive when it works but not as consisntely accurate as touch interaction and prone to misshaps. And it suddenly becomes confusing when vocal interaction goes amiss. Having said that, when it works it is great and the feauture that works best on Glass is – apparantly – shooting photos and video. Says Topolsky: “I won’t lie, it’s amazingly powerful (and more than a little scary) to be able to just start recording video or snapping pictures with a couple of flicks of your finger or simple voice commands.” 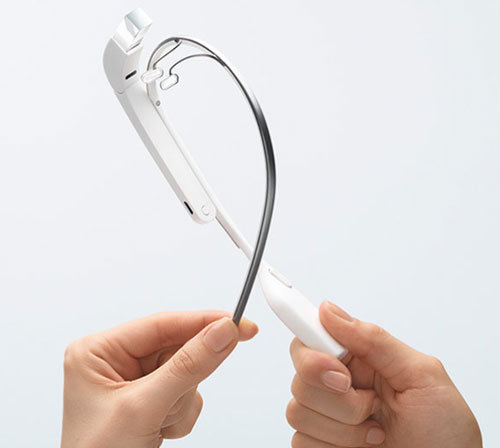 Images show that Google Glass is surpisingly flexible, which should help if they fall to the ground.

Who will wear Google Glass

A number of reviewers expressed concerns about who would wear it. Topolsky says “my mind begins to fixate on a single question: who would want to wear this thing in public?” He concludes with “But I walked away convinced that this wasn’t just one of Google’s weird flights of fancy. The more I used Glass the more it made sense to me; the more I wanted it.”

In this Apple iWatch and iGlass, we noted that “History hasn’t been kind to wearable gadgets”. But times change and maybe this is an idea that’s time has come. Glass Lead industrial designer Isabelle Olsson told the Verge: “Did you see that Louis C.K. stand up when he was telling parents, ‘your kids are better resolution in real life?’” The point being that we spend so much time starting at screens on devices these days, be they iPhones, Android phones or iPads, that we’re often missing out on what goes on around us.

The jury is still out on Google Glass, and more in-depth testing than a few hours by one publication will give a clearer sense of where Google Glass is at, and where it’s going. You can read The Verge hands-on test here.