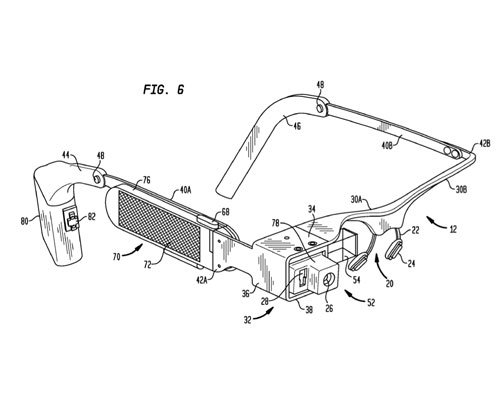 A new Google Glass patent was published today by the US Patent & Trademark Office that describes the technology in detail. The patent has been published alongside the first Google Glass review online.

The patent, titled “WEARABLE DEVICE WITH INPUT AND OUTPUT STRUCTURES” was originally filed in August 2011, and describes individual components and sensor systems. More interestingly it also goes in-depth to display, frames, image projections, as well as capture and wireless connections.

The text goes into detail about how the lens mounted display operates in relation to the movement of the wearer’s head. In our First Google Glass review it’s noted that Glass is activated by either tapping the button on the side, or tilting your head backwards. Both interactions are the ‘Slide to Unlock’ equivalent of waking up Google Glass.

Google’s patent also outlines another feature we’ve just heard about, that the frames of the Glass are touch sensitive. This means that as well as interacting by voice, wearers can slide their finger up and down the frame to make menu selections.

“Both head-mounted and heads-up displays can be connected to a video source that receives a video signal that the device can read and convert into the image that they present to the user. The video source can be received from a portable device such as a video player, a portable media player or computers […] The functionality of these types of displays is, however, limited to passive actions wherein the display simply receives information from an external source and presents it to the wearer in limited forms. Accordingly, further advances in wearable devices including displays have been needed.”

As with most patents there are a number of images detailed the features, but as we’ve often seen there’s a marked difference between the images in the patent (which just describe the technology) and the way the acutal technology will look. These two images below show this in action. 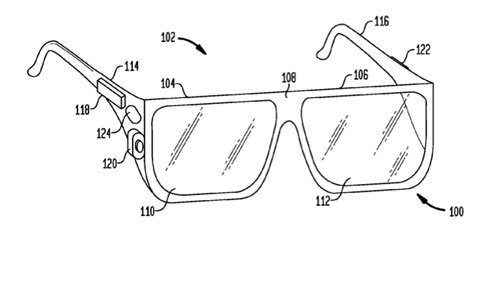 Fans of Augmented Reality technology will be pleased to hear that the Glass patent goes in-depth into how real-world objects can be overlaid with digital images to create virtual reality experiences.

The display is currently a lens mounted screen, but the patent also describes a method of displaying images using a “a laser or LED source and scanning system [that] could be used to draw a raster display directly onto the retina of one or more of the user’s eyes.” While having laser bounced into your eyes might be a rather scary sounding experience, if they’re low powered and proved safe this could be the future of display interaction. 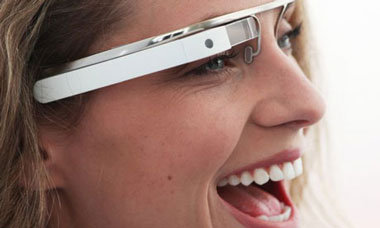 Google and Apple have both been involved in ongoing litigation regarding patents and their consumer device, most notably iPhone and Android mobile phones. Apple has made no announcement regarding any heads-up display mounted headwear,