A newly published Apple patent application suggests that the iPhone 5’s In-Cell touch display could be used in future Macs.

The patent application, which was spotted by Patently Apple on Thursday, clearly states that the advanced ‘Integrated Touch’ In-Cell display could be applied to the MacBook Pro, MacBook Air and iMac.

In-Cell display technology allows Apple to integrate touch sensor components within pixel cells of an LCD to create a thinner display panel. The patent filing says that devices that could benefit from such multi-touch display technology include “a notebook computer or a handheld electronic device,” specifically listing the MacBook, MacBook Air and other computers such as the iMac.

However, reports have suggested that Apple is considering a new ‘touch-on’ display technology for its next-generation iPhone following interference problems with the iPhone 5’s In-Cell display. 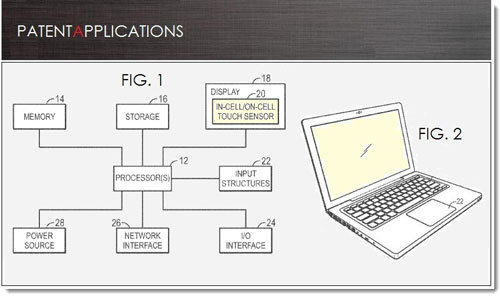 The patent application comes despite Apple CEO Tim Cook’s claim that combining a MacBook and iPad would be a disaster, and that I would be as pleasing to consumers as a toaster-fridge.

That said, late Apple co-founder Steve Jobs dismissed the idea of a smaller iPad because users would have to sand down their fingers in order to accurately tap on buttons on the screen, yet the 7.9in iPad mini was unveiled in November last year anyway.

Let us know your thoughts about the possibility of a touchscreen MacBook on Twitter.