FixYa’s data combines and analyses data from 722,558 problem impressions that have been posted by consumers through the organisation’s website or app, and also takes market share data from StatCounter into account, resulting in a Smartphone Reliability Report that can be found here.

The report gives each smartphone manufacturer a reliability score based on the information collected, and Apple has been assigned a reliability rating that is much higher than its rivals, at 3.47 compared with runner up Samsung’s 1.21 score. Nokia and Motorola were left trailing behind with reliability scores of 0.68 and 0.13 respectively. 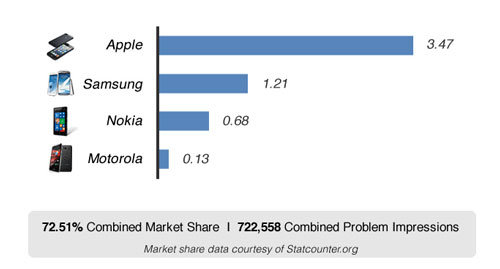 When analysing the results further, FixYa’s report highlights that the iPhone’s battery life causes the most problems for users, with the lack of new features, customisability and issues connecting with WiFi networks also highlighted.

FixYa notes that the simple user interface, reliability and app ecosystem are the most significant pros for Apple’s iPhone.

Motorola users have fond that preinstalled apps cause the most issues for their smartphones, while touchscreen issues, speaker quality and camera quality are also problem areas. The design and battery life are the Motorola Droid’s strengths, though, says FixYa.

As for Samsung, the microphone is the biggest issue for the Galaxy lineup, with a total of 40 per cent of the problem impressions relating to that area. Speaker issues, battery life and overheating are also highlighted as common problems experienced by users. FixYa says that the lineup’s screen quality, user interface and the battery life of the Galaxy SIII are the pros for Samsung.

Finally, Nokia’s Lumia range is describes as being “laggy” by FixYa, who’s research found that a poor app ecosystem, battery life and overheating are the biggest problem areas here. The screen durability and touchscreen, as well as the homescreen user interface are described as the Lumia lineup’s strong features.

“Smartphones are consistently being compared on a case-by-case basis, but no one has looked at the overall trends across a manufacturer’s entire smartphone line,” FixYa CEO and founder Yaniv Bensadon explained. “The result is an accurate and fair method, and a scaled approach to fairly compare these top companies to truly see who is most reliable, and who is barely even competing.”

Why does everyone hate Apple right now?