Macworld has tested this by sending two test emails from a personal iCloud account. The message read “My friend’s son is already allowed to drive his high-powered car. It’s ridiculous. He’s a barely legal teenage driver? What on earth is John thinking.”

The second email amended the phrase “a barely legal” to “barely a legal”. This second email was delivered fine, whereas the first is still undelivered. Upon further testing we discovered that the phrase is not blocked by Siri or iMessages, both of which can search and send messages containing the term: “barely legal teen”. 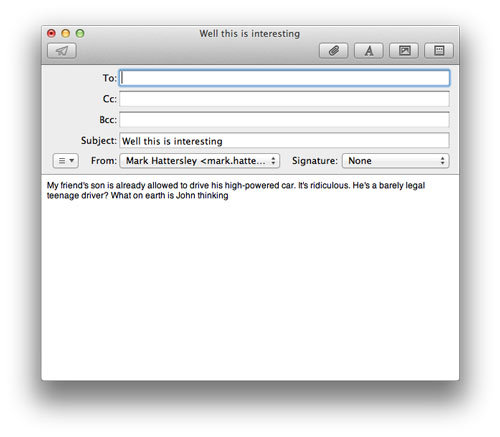 The phrase “barely legal” is used in pornographic searches, and has a decidedly unsavoury context of youth. The type of pornography of children that are just over the watershed age that is generally considered legally acceptable (typically 18-years-old for the United States audience, although it varies by territory). Its association with paedophilia is undeniable, however.

Other similar phrases, such as “All grown up” often used by the British press can still be sent.

A reader called Steven G. first alerted Macworld sister site, Infoworld. His email goes to some length to explain how he discovered that the phrase was banned:

Steven G says: “A screenwriter was delivering a PDF attachment of a draft of his script to the project’s director, by emailing it from his iCloud/MobileMe account to Gmail. The problem? The script would never arrive, no matter how many times he would send it. But sending other PDF documents worked fine.”

He began experimenting with the file, turning the screenplay to a PDF and ZIP and then encrypted the file using Apple’s encrypted archive format. But it came with an unusual “Not Virus Scanned” message appended to the subject field. He began to suspect that something inside the file was failing and then started to cut it into smaller parts to send it.

Steven G. writes: “AND THEN I SAW IT — a line in the script, describing a character viewing an advertisement for a pornographic site on his computer screen. Upon modifying this line, the entire document was delivered with no problem.”

Infoworld’s Robert X. Cringely has since highlighted the fact that he first wrote about this back in November 2012. It appears that Apple is sporadically banning the term, amongst perhaps others. It is likely that Apple is banning specific terms from iCloud Mail as a Spam-filtering exercise on an ad-hoc basis. Several readers have noted that since our test mail messages with the term “barely legal teen” are once again permitted, and we can confirm that this is now the case.

Macworld US writer Dan Moren has written an in-depth article as to why Apple banning messages at the server side is a bad idea. In his article Silent email filtering makes iCloud an unreliable option he says: “so much important communication is conducted by email that we expect it to be rock solid. So when emails don’t arrive – or even worse, we don’t know that they didn’t arrive – it can be worrisome. Moren concludes: “Apple’s choice to delete certain messages before they arrive may help in the war against spam, but there’s too much risk of collateral damage.”

Apple has a history of being anti-pornography. Pornographic apps are not allowed on the app store, and Apple does not allow pornographic content in its iBookstore.

See: Topless girl app could lead to Apple being sued and Apple vs. Ann Summers in iGasm spat

Apple also rejected a iBookstore e-book submission on the Hippie movement it rejected the book because it contained photographs of naked people. As Artsfredom says “The market is extremely large, and it is not one bit too much to talk about artistic censorship when they exclude a book which content is not criminal.” 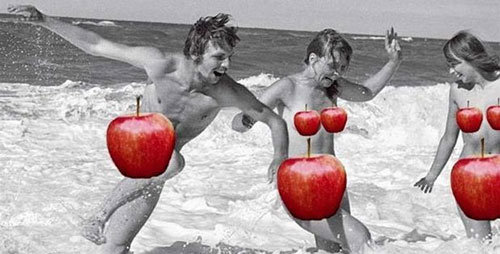 In 2010 former Apple CEO Steve Jobs entered into conversation with Gawker’s Ryan Tate. Tate asked “If Dylan was 20 today, how would he feel about the company? Would he think the iPad had the faintest thing to do with “revolution?” Revolutions are about freedom.”

Jobs replied “Gosh, why are you so bitter over a technical issue such as this? It’s not about freedom. It’s about Apple trying to do the right thing for its users. Users, developers and publishers can do whatever they like – they don’t have to buy or develop or publish on iPads if they don’t want to. This seems like it’s your issue, not theirs.”

However, censoring the emails of personal individuals using Apple cloud services does seem to be another step on the ladder towards Apple control. People do not have to use Apple’s iCloud service, there are plenty of rivals such as Gmail and Live, but Apple makes iCloud easy to set up and it still feels like a personal intrusion to have Apple’s computers deciding what you can and can’t say.

See: Do you trust Apple’s App Store with the future of print and Apple wrong over iPhone app rejectection

Barely legal is, as many people note, not the same as “illegal” so Apple has no legal requirement to enforce this rule, and appears to be doing it of its own volition. Apple’s iCloud terms and conditions acknowledge Apple’s ability to do this.

“You acknowledge that Apple is not responsible or liable in any way for any Content provided by others and has no duty to pre-screen such Content. However, Apple reserves the right at all times to determine whether Content is appropriate and in compliance with this Agreement, and may pre-screen, move, refuse, modify and/or remove Content at any time, without prior notice and in its sole discretion, if such Content is found to be in violation of this Agreement or is otherwise objectionable.”

It would appear that Apple is now putting those terms into practice. We wonder what other terms are on Apple’s iCloud mail blacklist?