A study by Appthority claims that the free apps in Apple’s iOS App Store collect more data than free apps available from Google Play, and this poses a privacy risk.

The Appthority App Report for February 2013 “provides an overview of the security risks behind 100 free iOS and Android apps”. It focuses on free apps because “free apps are more inclined to collect data on the user and share it with outside parties.” The report suggests that more data is shared by iOS apps because there are so many apps on the App Store that developers have to look for extra revenue streams.

The data appears to suggest that 60% of the ten top-selling iOS apps shared data with advertising and analytics networks. In the case of the top Android apps, it was 50%.

Readwrite writes that it took a “closer look” and noted that: “iOS apps were far leakier than their Android counterparts”. 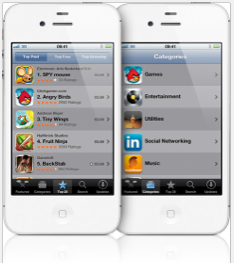 According to the data, 100% of iOS apps sent unencrypted data to ad networks, while in the case of Android, this was 92%.

Appthority suggests that the reason why more data is sent from iOS apps to ad networks is that iOS developers have more competition so they have to work harder to make money.

The report concludes that: “iOS apps had more access to user data than Android. In fact, this year’s iOS apps had even more access to data than the iOS apps from last year. Appthority anticipates that this trend will increase for both iOS and Android apps moving forward. As developers seek ways to monetize free mobile apps, users will be asked to approve of more app permissions that have less to do with these apps, but collect their personal data and share it with outside parties.”

“It’s generally perceived that Android devices are more “dangerous” due to the increasing amount of Android malware. But in actuality, mobile malware infects less than one percent of apps. The real concern should be over how mobile apps are handling personal info and company data. In that respect, iPhones should not be considered any safer than Android devices. Any Internet-connected device can be put data at risk,” claims Appthority.

The claims come days after we reported that app developers were claiming that Apple was rejecting cookie tracking apps.

Apple recently introduced an Advertising Identifier in iOS 6.1. This new tracking technology, called IFA or IDFA (Identifier for Advertisers), doesn’t identify you personally. It just provides data that advertisers can use to send relevant ads to the right devices.

There is general agreement that IFA is an improvement over the previous system of Unique Device Identifiers ( UDID).