Ferrari’s new four-seater FF car has two iPad mini tablets accessible from the passenger seats and Siri integration as the company expands its partnership with Apple to improve in-car entertainment.

According to Bloomberg Businessweek, Ferrari Chairman Luca Cordero Di Montezemolo said at the Geneva Motor Show on Tuesday that the company will be “more precise” about its partnership with Apple in the next few months.

The new FF, which is the first four-wheel drive four-seater ever made by Ferarri, features the Siri-based Eyes Free voice-command system that was launched by Apple in June last year, when the company revealed that it had been working with a number of car manufacturers to integrate Siri functionality into vehicles, through the use of a button on the steering wheel that launches Siri on your iPhone.

Siri has been seamlessly integrated into the FF to provide direct access to the infotainment system built into the car. The FF also has two built-in iPad minis that are accessible to the passengers. 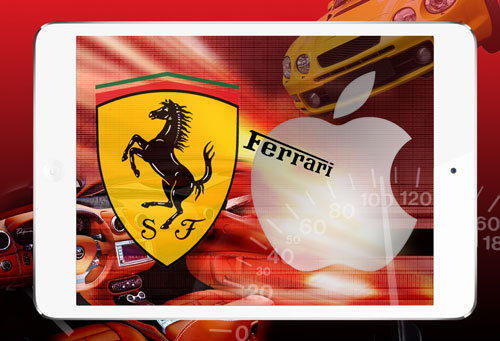 Back in November, Eddy Cue, Apple’s senior vice president of internet software and services, j oined the board of directors at Ferrari. At the time, Di Montezemolo said: “I am delighted that Eddy Cue, one of the main driving forces behind Apple’s range of revolutionary products, has now joined our board. His huge experience in the dynamic, innovative world of the internet will be of great assistance to us.”

Cue is believed to have a collection of sports cars, including a Ferrari.

During the Geneva Motor Show, Ferrari also unveiled its new hybrid car, the 963 horsepower LaFerrari, of which just 499 models will be released at a cost of about 1 million Euros (£864,347).