Schiller wrote: “Be safe out there” in his tweet, linking to F-Secure’s latest Mobile Threat Report.

The report reveals that 96 new families and variants of Android malware were discovered in the fourth quarter of 2012, almost doubling the number recorded in the previous quarter. A total of 79 per cent of all mobile threats in 2012 targeted Android devices compared to just 0.7 per cent for iOS.

F-Secure notes that a large portion of the new malware, with 21 variants, discovered in the fourth quarter were PremiumSMS, which uses shady SMS-sending practices to generate profit. 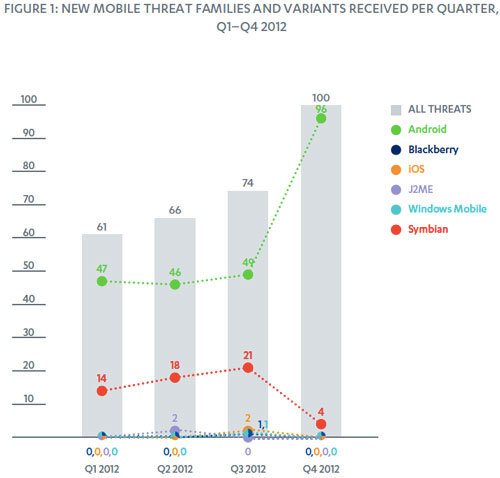 F-Secure attributes the rise of Android malware to the operating system’s growing market share, which has risen to 68.8 per cent in 2012.

Meanwhile, Chitika Insights data, which was collected from tens of millions of US and Canadian ad impressions running through the Chitika Ad Network in February, shows that the iPad is still trumping rival tablets in terms of web traffic share, with 80.5 per cent of traffic originating from Apple’s tablet. The closest rival to the iPad is Amazon’s Kindle Fire, accounting for 8.0 per cent of web traffic throughout the same period.

Apple’s iOS devices also account for 73 per cent of Gogo’s in-flight WiFi traffic from smartphones across the 1,800 aircraft that have Gogo’s service available, the company revealed on its blog.