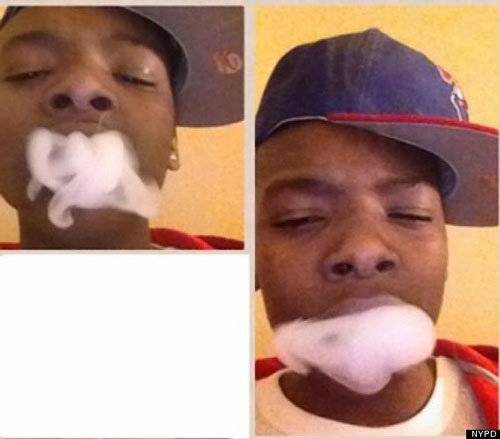 A dim-witted iPhone thief has taken a self portrait of himself where he is believed to be smoking dope, according to a photo released by the New York Police Department.

Police report that a man stole a woman’s iPhone on 2 March 2013 in The Bronx, and is assumed to have been using it since then. The thief is alleged to have taken a photograph of himself emitting large quantities of smoke.

The suspected phone snatcher was caught unawares because the iPhone was set to auto upload all photographs to Facebook. Since Apple integrated Facebook into the iPhone’s operating system in iOS 6, it has been possible to have all photographs taken on the phone automatically sent to Facebook (where the user can decide which ones to share).

Police believe the man in the photo is smoking marijuana, reports the Huffington Post.

Cloud services, where a device’s functions are integrated with remote servers, are becoming increasingly commonplace. And it’s becoming clear that cloud services are going to be the bane of many of criminal’s life. Earlier this month we reported on a man arrested after child pornography was detected on a remote cloud service.

Apple, meanwhile has been criticised for its lack of anti-theft measures in the iPhone, although the company does include a Find My iPhone feature that enables users to locate lost phones, and send messages to people who have ‘found’ lost phones.

It has been reported that up to 40 per cent of all New York City thefts involve Apple devices.

The police suggest that “anyone with information on the robbery or identity of the man behind the selfie, please contact Crime Stoppers at at 1-800-577-8477 (this is a US phone number, incidentally).

Let’s hope they catch him soon.