In addition to problems with fans and ghosting on the Retina display, a report has appeared claiming that users are experiencing “other significant performance issues”.

9to5mac has rounded up a number of threads on Apple’s support communities that suggest that users are experiencing a range of issues; we have uncovered a few more.

These issues include ‘sudden rMMP graphics-related performance issues‘ (13,712 Views)that cause frequent freezing and crashing, said to have been fixed by Apple’s latest update. However, as one respondent claimed: “They fixed noting in my case. CPU throttling as before near 80’C.”

Another writes: “My rMBP was in for repairs for over 3 weeks now. They tried putting in a couple of different logic boards but this did not fix the issue. Eventually the new SMC update came and they applied it and told me that it was fixed.  Took it home and found that there was still throttling at about 80 degrees centigrade too!” 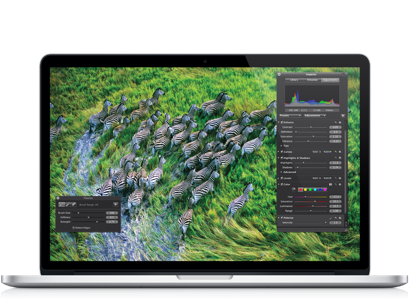 I am not sure how to reproduce it, when it happens, it will have horizontal lines cutting across the screen very quickly and disappear”, said a poster in October.

There are also reports of Macbook Pro Retina battery problems. Both the 13in and 15in MacBook Pro with Retina display are said to experience the issues.

Apple is being sued for not indicating to consumers that there are two types of Retina displays used for its MacBook Pro. Retina displays that come from LG and, apparently, suffer from ghosting issues.

Apple also uses Samsung displays that are not affected by the issue, according to reports.

In addition, Apple’s latest MacBook Pros with Retina display appear to be experiencing fan speed issues that may be related to Apple’s decision to move from an solid-state drive provided by Samsung to one provided by Sandisk. Reports claim that an issue is causing the cooling fan in the newest version of the Retina MacBooks to spike during basic tasks.