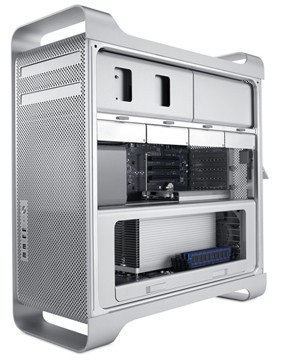 Recently I looked at the sad plight of Apple’s professional desktop computer, the Mac Pro – a system that even the affable Jony Ive blanks when he walks past.

Forgotten it might be but the Mac Pro, reviewed, offers so much more than most other Apple computers. The trouble is that Apple is more about less than more, or should that be less about more. I think I’ve got it… for Apple, less is more.

The Mac Pro is a classic tower computer, offering owners the opportunity to open up the case and tinker around, taking stuff out, replacing parts with other components of their own choosing. Apple hates that.

Apple knows best. It doesn’t ask focus groups what to put in its products. And the customer should jolly well stick with what Apple gives them. Think you know more about components than Apple’s Senior vice president of Hardware Engineering Dan Riccio, do you?

You can’t unclip an iPhone or iPad and add a new battery, faster chip or bigger storage. To do any of that you need to buy a brand new device from Apple.

Apple’s laptops are pretty closed, too. The only thing you can open is the lid. If Apple had its way we’d all be using iPads where there’s not even a lid to open. On its laptops Apple uses 5-point Pentalobe security screws to attach the lower case, and even smaller versions of the same proprietary parts on its mobile devices.

The Pentalobe is similar to a Torx screw, itself once a rarity and barrier to the average punter pulling things apart. Apple didn’t invent it but it scoured the world’s tech shops for the most obscure screw that fitted its other design criteria, bought up the rights and had anyone involved in its creation murdered, dismembered and thrown in the Lisa landfill pits of Utah.

The engineers who built the mechanism of the gold and blue Torre dell’Orologio clock in Venice’s Piazza San Marco were rewarded by having their eyes gouged out to ensure that no other city could have such a wonderful clock. The same thing happens to the guys behind the Genius Bar at your local Apple Store every time an iPod is prised open. That’s the real reason you’re told your iPhone must be waterlogged and therefore crushed on the spot rather than repaired.

If, by chance, you have an Apple device that still uses standard Phillips #00 screws, and you take it to the Store for repair it will come back with shiny new Pentalobes to ensure you have no chance of opening it up later.

Apple initially designed this tamper-resistant system in 2009 to secure the battery in its portables. Now it’s the first line of defence in getting past the bits of a Mac you can actually touch with your dirty non-Apple hands.

You can buy special screwdrivers to loosen the Pentalobe screws, and you’d be wise not to try using something that merely looks like it would do the job.

Most other security screwdrivers will quickly strip the miniature heads, stopping over-eager geeks or maybe even Apple ever trying to unlock the device again. It’s a case of when the shut hits the fan.

The desktop Macs don’t fare much better either. The latest iMacs are literally glued down. Apple has fused the iMac’s glass front panel and the LCD together, where they used to be attached with magnets.

To remove the adhesive you need to use a heat gun! Legendary teardown artists iFixit then had to use low-tech guitar plectrums to pry the two pieces apart. Cutting open the display destroys the foam adhesive. Putting things back together requires peeling off and replacing all the original adhesive.

Get the message? Apple doesn’t just deter you from opening its products; it will destroy the device if you even try. So that’s why the Mac Pro has been on death row for so long. In order to get the latest processors you need to buy an unopenable iMac and not the brazenly accessible Pro.

Steve Jobs once said that the backs of Apple’s computers look better than the fronts of its competitors. He could have added that you are more than welcome to look at these backs just so long as you don’t touch.