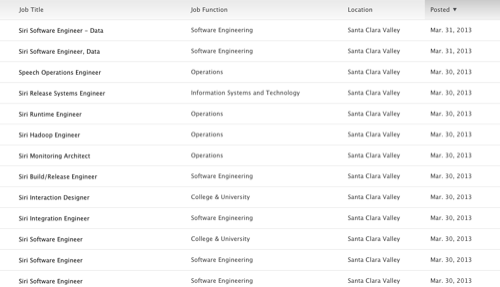 Over the Easter weekend Apple advertised 13 new job positions relating to Siri, suggesting that the company is ramping up development of the speech recognition technology that is still in beta almost two years after the software was acquired by Apple.

The roles include a couple of ‘Siri Software Engineer – Data’ who will join the Siri data team, which is responsible for the analytics of Siri usage, the preparation and serving of data that Siri uses to answer questions, and the sophisticated algorithms that use the data to improve Siri’s accuracy, according to the job description.

A Speech Operations Engineer will “take part in building and managing some of the worlds largest server deployments”.

A Siri Runtime Engineer to “bring our environment to the next level”.

Apple is looking for a Siri Monitoring Architect to take responsibility for :development of on-going support of several core components of the Siri Platform,” states Apple.

A Siri Build/Release Engineer to “take ownership of our git project work.  You will be responsible for building our git repository from the ground up.”

Three Siri Software Engineers who will “integrate both our server platform and iOS client.”

All the roles are at Apple’s Santa Clara Valley office in California.

There are a number of Siri related jobs that have been posted since the beginning of the year. One job post in February suggested that Apple was recruiting a developer to bring Siri to the Mac.

Apple is also recruiting for its Elk Grove offices. The positions range from customer service and support.

Apple has had operations in Elk Grove for 20 years, notes Sacramento Business Journal, although it is unclear what Apple does in its Elk Grove office.

Apple’s filings with the Securities and Exchange commission suggest that the location handles warehousing, distribution and a call centre.

Business Journal suggest that in September 2012 there were around 1,800 employees there, up from 600 a year earlier.

Siri on the Mac: Apple recruiting developer to bring Siri to the Mac