Mid-size phones such as Apple’s iPhone see the most regular usage, while ‘phablets’ are a ‘fad,’ with the least amount of regular usage among mobile devices, a new report has found.

Flurry Analytics has this week published a report based on data it collects from the one billion smartphones and tablets the company detects every month via its network. The report focuses on the top 200 device models, which represent more than 80 per cent of all usage.

The device models have been split into five different size groups: small phones with 3.5in or under screens such as BlackBerries, medium phones with screens between 3.5in and 4.9in such as Apple’s iPhones, ‘Phablets’ with a screen size of between 5in and 6.9in such as Samsung’s Galaxy note, small tablets like Apple’s iPad mini and full-size tablets including the 10in iPad. 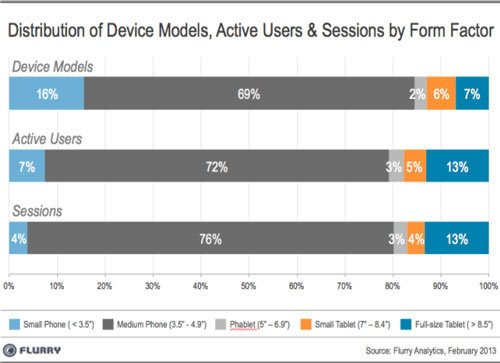 “The ‘Is it a phone or is it a tablet’ devices otherwise known as phablets have attracted interest, but currently command a relatively small share (2%) of the device installed based, and their share of active users and sessions is also relatively small,” reads Flurry’s report, which also describes ‘phablets’ as a “fad.”

It’s been speculated that Apple could be working on its own phablet, dubbed iPhone plus or iPhablet, but Flurry’s report suggests that Apple shouldn’t rush to push out a larger device as they may be short lived in the mobile market.

When evaluating the distribution of active users by form factor across different operating systems, Apple’s iOS has the highest share of active devices using large tablets, at 24 per cent, while Android is the only operating system in the phablet market, with 7 per cent of devices running it falling into that category.

Despite the launch of Microsoft’s Surface tablet, the only Windows device models that are in Flurry’s top 200 are medium-sized phones. 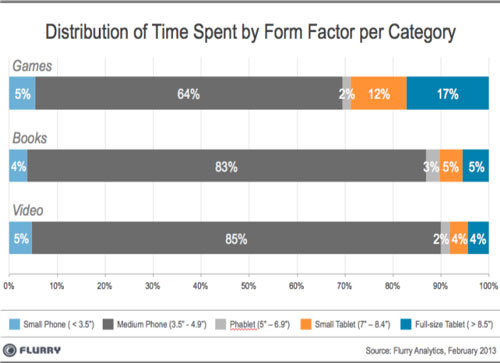 The results show that medium-sized phones are used the most for playing games, reading books and watching videos, but tablets are the favoured device for playing games, with a total of 29 per cent of gaming app session time attributed to tablet devices.

“We expect that tablets may represent a greater share of time spent in book and video apps in the future as tablet ownership expands and tablet owners branch out into more types of apps,” Flurry notes.