This week, Apple has been granted 33 new patents covering various inventions including the Mac mini, gesture movies and an improved on-hold experience, and has also filed several patent applications for improved pedometer accuracy, Street View-like Maps features, and even a MacBook-iPad hybrid device.

Among the Apple patents published by the US Patent and Trademark Office on Tuesday is one that relates to the company’s gesture movies. These movies are designed to assist users in performing gestures when using an input device such as a trackpad.

Patently Apple reports that the patent describes various ways that the gesture movies could be displayed, and could be made available on demand rather than having to visit the settings menu. This could include a pop-up window or reference panel containing a list of gestures. Alternatively, the user could call up a virtual gesture movie control ring that appears around contact points when the trackpad detects that a finger has been placed on it in a particular area. 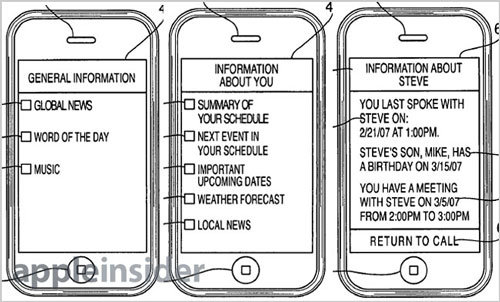 A second patent granted to Apple this week covers a “communications system that provides user-selectable data when user is on-hold.”

In other words, Apple’s invention is for systems and methods that aim to eliminate the dreaded hold music and allow users to access customisable, adaptive information while on hold. This information could be based on who the user is calling, the date, the time, the users’ calendar, their location and more. Other information that “may not necessarily be sorted on a user’s device,” such as news, weather or music, for example.

Another patent won by Apple this week is titled ” techniques for credential strength analysis via failed intruder access attempts,” and intends to store and evaluate failed password attempts when intruders attempt to access a secure network, in order to improve the security of access credentials for businesses.

The system could determine a threshold of tolerance for password mistakes made by authorised employees, to only record failed access attempts that fall outside of that threshold for a more accurate strength evaluation.

Other patents granted to Apple this week cover inventions including multi-touch event processing for documents on a device such as an iPhone or iPad, the original Mac Mini, apparatuses and methods for intricate cuts such as Apple’s logo on its Macs.

In addition to Apple’s patent wins, the US Patent and Trademark Office has also published several patent applications filed by the company.

Three of those patent filings cover pedometer accuracy improvements, which could be implemented into a wearable accessory such as the rumoured iWatch, reports Apple Insider.

When Apple rolled out its iOS 6 Maps app last year, many users found that Apple’s offering lacked the Street View features that are available in Google Maps.

Apple’s new ” 3D Position Tracking for Panoramic Imagery Navigation” patent application discovered this week describes a Maps feature that would use the iPhone or iPad’s onboard sensors to “navigate virtually a location in panoramic imagery,” much like Google’s Street View feature does. 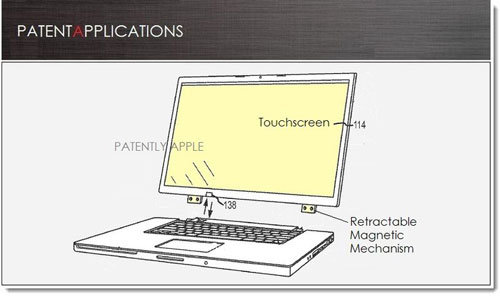 Despite Apple CEO Tim Cook’s comments that a MacBook and iPad hybrid product would be like combining a fridge and a toaster, Apple has filed a patent for such device, which was published by the US Patent and Trademark office this week.

Apple’s patent describes a device that would have a touchscreen display that can be removed from the keyboard and trackpad-equipped base, and can also be rotated when attached to the base.

Additionally, power could be wirelessly transferred from the base component to the detached display.