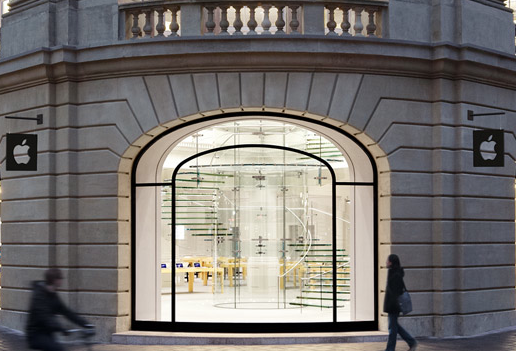 He told Bloomberg: “I were Samsung I would be tapping him to go into those new 50 store in stores.”

Sculley also thinks that Apple will also be looking to reemploy Johnson: “I think he is going to be in high demand to go back to Apple to continue to build out the Apple Store experience.”

Should everyone be queuing to employ the man who was just fired from JCPenney though? (JCPenney is a chain of mid-range department stores in the US).

The wrong men for the job

After 11 years as senior vice president of retail operations at Apple, some have suggested that Johnson was wrong for discount retailer JCPenney.

According to reports Johnson was fired because JCPenney has seen a 27% drop in revenue in the past year. The retailer has also seen its lowest sales in decades, amidst the worst recession of the past 80 years. Johnson has been criticized for banning discounts at the store, among other changes that are considered to have driven the store’s customers away.

John Browett, the man who took over Johnson’s role at Apple, only to be fired some months later, “would have been, ironically, more suited to JCPenney”, notes MacTrast. Prior to Apple, Browett was head of Dixons.

Sculley also defends Johnson’s tenure at JCPenney, suggesting that it was just a bad fit: “He just picked the wrong industry. He should have focused on changing the culture in a high tech product like Samsung as opposed to jumping over to something that was a parallel.”

What Johnson did wrong at JCPenney

Sculley suggests that Johnson’s mistake was: “Trying to make a creative leap to something that could be about the future without protecting the cash flow, and the customers who used to go to JCPenney just didn’t come back.”

Sculley draws comparisons with his own experience at Apple to highlight the mistakes Johnson made. Crucial is keeping existing customers happy. “The first year I was there [at Apple] I focussed entirely on the Apple II – Steve was still building the Macintosh – the reason for that was we had to be assured that we had the cash flow from the ageing Apple II that would be able to carry the Macintosh for the first three years. Fortunately the Apple II was very successful during that period of time and when the Mac ran into trouble the Apple II was there to carry us through.”

Others suggest that the mistake was JCPenney’s rather than Johnson’s, the retailer should have given Johnson more time to make a difference. Daring Fireball’s John Gruber wrote: “They shouldn’t have hired him if they weren’t going to give him more time to turn it around.”

Was Johnson really the genius behind the Apple Store?

Other reports suggest that Johnson is entirely to blame for JCPenney’s troubles, and that his failure there indicates that he was not the genius that he is often credited as. Johnson is widely regarded as the man who invented the Apple Store, however, a Forbes report is suggesting that it was Jobs who made Johnson look like a genius.

“There has always been a debate about who was the real genius behind Apple Stores. Was it Steve Jobs or Ron Johnson? Now the debate is settled,” writes Nigram Arora.

That report suggests that the Apple Store was Jobs idea and notes that Jobs merely hired Johnson from Target in 2000 to help build them.

Should Johnson go back to Apple?

Regardless of whether Johnson made a mess of his job at JCPenney, and regardless of just how much of the Apple Store was the result of late CEO Steve Jobs’ genius, there are, inevitably, calls for Johnson to return to Apple where he would surely be a good fit. Johnson knows how Apple works and he has worked with Jobs. He should slip right in.

MacTrast suggests that Apple could even benefit from what Johnson has learned at JCPenney: “Johnson’s now been in a sticky situation. As such, he’s especially well positioned to offer Tim Cook advice on how to handle Apple’s present situation.”

The calls are all the louder given that the role is vacant since Browett’s departure.

Sculley also sees this as a logical option for Apple: “One of the beauties of our culture in the US is that we give people permission to fail. Ron Johnson is a very talented, creative person. Don’t forget that the Apple Stores are the single most successful retail venue ever. I think he is going to be in high demand to go back to Apple to continue to build out the Apple Store experience.”

Should Johnson go to Samsung?

Sculley’s other suggestion is that Johnson could go to work from Apple’s arch-enemy, Samsung, which has inevitably raised a few eyebrows. He told Bloomberg: “Ron Johnson would be a superb executive to go in and build an experience for Samsung in the store in store in Best Buy. Similar to what he did at Apple.”

Of course it should be noted that Johnson was CEO of JCPenney, would he want to take a demotion and return to a job where he is merely a retail head. Johnson may wish to take a job as a CEO somewhere else in retail that fits his experience better.

VP of Apple retail resigns, passed up for head of retail job?