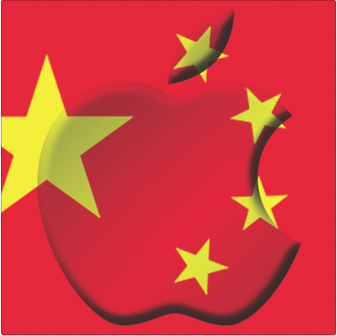 Apple Senior Vice President of Operations Jeff Williams is said to be in China trying to smooth things over in the country that recently attacked Apple over its warranty practices.

Chinese website Zol.com.cn is claiming that Williams, also known as Apple CEO Tim Cook’s “right hand man” is currently in Beijing where he is attempting to “deal with the PR crisis”.

A ‘Consumer Rights Day’ report on Chinese government run television CCTV and a sponsored celebrity tweet suggesting that Apple was in the wrong lead to suggestions that the Chinese government was discrediting Apple. There are various suggestions as to why China’s government might want to encourage anti-Apple sentiment, from lack of advertising to concern about smartphones spreading dissent.

In the programme for China’s Consumer Rights Day, Apple was attacked for alledgedly treating Chinese consumers worse than consumers in other countries. The programme claimed that Apple is breaking Chinese law by not replacing damaged iPhones with a completely new model.

In response to the criticism, Cook published an open letter apologizing for any misunderstandings regarding to Apple’s warranty policies in the country.

“We have become aware that our external communication was not enough and misled observers into thinking that Apple had an arrogant attitude,” Cook said. “For any concerns or misunderstanding we brought to our customers, we express our sincere apologies.”

This isn’t William’s first visit to China, last year he accompanied Cook on his trip to meet Chinese officers from Minister of Commerce, notes Mac Rumors.

MIC Gadget suggests that Williams does what Cook did when he was chief operating officer, including managing the company’s vast supply chain and production process, overseeing Apple’s relationship with supplier Foxconn and negotiating supplier deals.

Apple isn’t the only company to have come under fire in China recently. Microsoft is also facing criticisms of its warranty practices in China, with the state-owned radio service criticizing Microsoft’s after-sales service for the its Surface tablets, according to Bloomberg.

China National Radio reported on Monday that Microsoft was only offering a one-year warranty, when a two year warranty is required by law.

However, yesterday Microsoft denied the reports, claiming that Surface Pro and its main components are covered under a two-year warranty, reports Bloomberg.

Why China matters to Apple

However, China may be less keen on Apple gaining a greater hold on its people, especially if in doing so the Chinese government looses some of its control of its citizens. As noted above, the Chinese government will surely have noted the part iPhones and other smartphones played in last year’s Arab Spring. Even the UK riots organized themselves using Blackberry phones. A recent report highlighted that even the FBI is unable to intercept iMessages sent from Apple devices.

With this in mind perhaps China is a no win situation for Apple. In addition, the country may become even more impenetrable in the advent of difficulties with North Korea.