At this year’s Shanghai Motor Show, Volkswagen reveals its latest masterpiece: the iBeetle.

Developed in partnership with Apple, the car is available as a coupe or convertible, and takes inspiration from both Apple’s smartphone know-how and Volkswagens smooth craftsmanship.

The new iBeetle comes with an iPhone docking station integrated into the dashboard, allowing you to use your phone to its full capacity – hands-free calling, navigation, music and so on.

Volkswagen has even created its own app, dubbed, the “Beetle app.” This app offers a number of useful features, including the full integration of Spotify – allowing you to stream and share music as well as displaying information on the instrument panel. 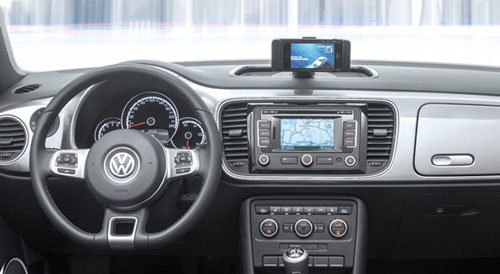 The app also provides the “Expert” feature, this allows the iPhone to display vital information such as oil and coolant temperature, a stopwatch and a compass, as well as the total g-force generated at corners. The app also includes “Trailer”, which lets drivers compare driving specs with other Beetle owners via social media. You don’t have to worry about missing out while on the drive anymore; the “Reader” function vocalizes Facebook messages and text messages.

The iBeetle has been on the horizon for a while, with the late Steve Jobs giving it momentum, as Apple board member Mickey Drexler has confirmed: “Steve’s dream before he died was to design an iCar.”

Volkswagen isn’t the first company to offer such services, however, as Mercedes installed Siri Eyes-Free into its A-Class cars not too long ago. This enables drivers to use their iPhone via voice command, without having to touch the phone.

The iBeetle has been styled to compliment the design of the iPhone, available in Galvano Grey, Deep Black Pearl Effect, Platinum Grey, Reflex Silver, Candy White, as well as Oryx White Mother of Pearl Effect.

The iBeetle is set to launch at the beginning of 2014, prices are yet to be confirmed.